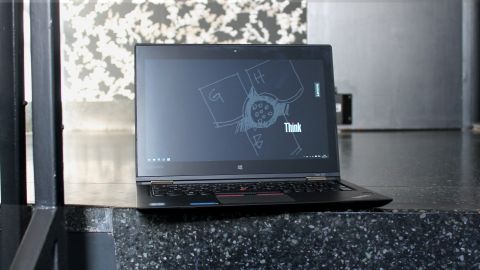 The ThinkPad Yoga 260 overcomes its lackluster display to deliver a practical, feature-packed business laptop that bends over backwards to please.

ThinkPad fans have a few reasons to be excited right now, not least because Lenovo is putting a lot of effort into creating a new generation of ambitious business laptops that aim to blend the old and the new.

There'll always be a new T-, W- or P-Series ThinkPad each year that makes a tweak here or there, but it's consumer-inspired models, like the ThinkPad Yoga 260, that are catching my eye.

Sadly, Lenovo's latest laptop doesn't get a gorgeous OLED display, like the one unveiled on the ThinkPad X1 Yoga from CES 2016, but it shares similar qualities.

The 260 is relatively thin and light and sports a typically solid ThinkPad chassis that's reinforced by Lenovo's honeycomb-designed roll cage.

It even comes with a rechargeable Wacom stylus for scribbling notes on the display.

Maybe it's just me, but I couldn't help but picture a convertible with a dodgy hinge when I first saw the Yoga 260's name.

Thankfully, that's not the case, and the 260's dual display hinge betrays its name to rotate the full 360 degrees, allowing you to use it in the usual laptop, tent, stand and tablet modes.

The 260's thickness makes it unsuitable for use as a tablet all of the time, but being able to flip the keyboard occasionally comes in handy. It's much easier to watch a video with the keys tucked out of the way, for example.

If you work with an external monitor, folding the display flat effectively turns the 260 into an external keyboard, and jotting notes on the display using its stylus is much easier in tablet mode.

The 460 features a QHD display and optional, discrete Nvidia GPU. So, if you don't mind sacrificing portability in exchange for more pixels and graphics grunt, then the 260's larger cousin is the more suitable choice.

There's no shortage of consumer-focused 12-inch laptops and hybrids that would make suitable competitors to the Yoga 260, but business-aimed models are in shorter supply.

In the former category is the Dell XPS 13, which lacks the 260's handwriting and security features but can't be counted out due to its price, innovative design and bag-friendly portability.

The Dell XPS 12 is a 2-in-1 with a compact body and an excellent keyboard that's equally as impressive as the Yoga 260's. It also has two USB-C ports (one for charging), and it can be configured with a 4K display.

HP's EliteBook Folio 1020 G1 is an attractive alternative in more ways than one. We called it the "MacBook of the business world" in our review, and – if you don't mind sacrificing versatility – it may prove a better fit for your needs.

The 260's colour scheme is typical ThinkPad; in fact, that's shorthand for business laptops in general.

The Yoga is dominated by either black or silver material, from the carbon fiber lid to the magnesium-alloy base, which is broken up by red on the left and right dedicated clickpad buttons and pointer.

Lenovo sparked fury among ThinkPad users by removing clickpad buttons for several generations of machines, but the 260 brings no such nasty surprises.

The Yoga's lid has a subtle sparkling effect that is particularly attractive in the absence of anything other than the signature ThinkPad logo in the corner that replaces the dot over the "I" with a glowing red LED.

At 12.5 inches, the 260 is more compact than most 13-inch laptops and slips into a bag easily for transportation. Its front edge features a slanted design that makes it feel less box-like than the Thinkpad Yoga 12, which resembles an X250 with a rotating hinge.

The 260's chassis is pleasingly grippable and makes it easy to open the lid on the first attempt wherever you grab at it. However, you'll need to hold the base steady with another hand to prevent it from lifting off the ground.

As with most convertibles, the Yoga 260's display has fairly chunky bezels, which makes the device easier to hold in tablet mode, but they don't look great.

They make it feel like you're peering into a letterbox due to the display's small size and 16:9 aspect ratio.

There's even a Windows logo on the lower bezel that opens the Start menu with haptic feedback response when pressed. It all feels a bit last-gen, a bit Windows 8.1.

Overall, I like the Yoga 260's design – but then I'm a fan of the ThinkPad's understated aesthetic. It isn't loud, but it does scream serious business.