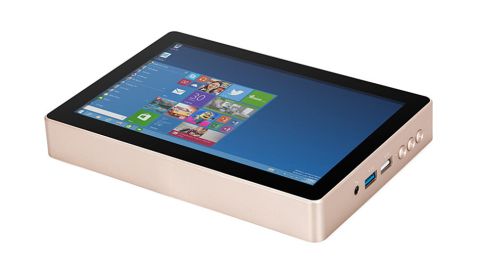 This is a mini tablet PC that lives for the day when universal apps will offer the same range and quality as their iOS and Android counterparts.

The Windows 10 era has spawned some unlikely computers, and the HiGOLE GOLE1 Plus certainly fits into that category. The manufacturer, Shenzhen Qianhai Gole Technology Company, is a Shenzhen-based maker of various computer products. These include Android devices, smart boxes, tablets and mini PCs.

Online Chinese retailer, Gearbest, sent us the sample and sells the HiGOLE GOLE1 Plus for around £135 (or $175) at the time of writing. Note that, while this price includes delivery, it is exclusive of any taxes that may be levied by HMRC or the courier companies on behalf of the vendor. Want to buy tech from online Chinese retailers? Read this first.

A follow-up to the 5-inch display GOLE1, the Plus model is a curious mash-up between the innards of a notebook PC and the outside of an 8-inch tablet.

At less than £140 for an Intel PC with a touch display and battery which is running Windows 10, the GOLE1 Plus looks like a bargain, at least on paper.

There’s something about the GOLE1 Plus that’s reminiscent of the first tablet PCs that Microsoft cooked up back in 2002.

Those devices failed for numerous reasons, including excessive weight, poor battery life, and Microsoft not grasping the concept of a touch-based interface.

The GOLE1 avoids all of those obvious mistakes, but the similarity is in the way that the first tablet PCs were repackaged laptops. And, under its curiously gold painted plastic skin, the GOLE1 is a notebook PC at its heart.

Of course, it does have an built-in touchscreen, but underneath it’s still an Intel Atom x86 machine with 4GB of RAM and 128GB of flash storage. Inside is also a battery that can power the device for more than four hours of continuous use, making it a tablet of sorts by definition.

Our first reaction when unboxing the machine was to think that this is a tablet computer which, unlike its Android and Apple brethren, has shunned a low-calorie diet.

Because from the front it’s a plausible 8-inch tablet, but once you get around the side you discover that its waistline has expanded to be 27mm thick.

Here is the HiGOLE GOLE1 Plus configuration sent to TechRadar Pro for review:

That chunkiness would be an issue if this device was meant to be held in the hands, but it isn’t. HiGOLE has included two metal rods with threaded ends that can be attached to create a semi-permanent support structure. There are four holes to choose between for these supports, providing a choice of two landscape tilt angles and a portrait mode.

The mounting layout is a VESA 75, should you wish to mount the GOLE1 on a support arm or attach it to a wall mount.

For peripheral connectivity the GOLE1 Plus is well served, having no less than three USB ports – although only one of these is USB 3.0 (the others are stuck on USB 2.0). The outer band also offers an audio headset jack, 10/100 LAN port, HDMI out and a microSD card slot.

That last feature helps the internal storage to be boosted by 64GB should you want to install more applications or carry more data on the machine.

There are also volume buttons and a power button along the right edge, and this is one of the few recent Windows 10 devices which still has a touch home button below the display area.

Next Page Performance, usage and verdict