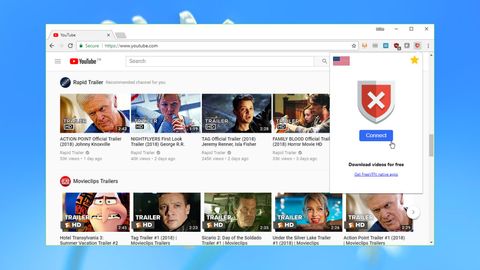 A below-par VPN proxy app from a developer who does nothing to deserve your trust. Avoid.

FreeVPN Free VPN Proxy is a Chrome extension which provides a free unlimited bandwidth proxy to – the developer claims – 'unblock any website'. This is not a free VPN application.

(ed: Check our list of best free VPN services should you want to grab better alternatives.)

The add-on offers a small but widely spread network, with locations in Canada, Germany, Netherlands, Singapore, United Kingdom and United States. That might not be enough to unblock any website, but it's still more choice than you'll see with some of the competition.

There's no special setup required. You don't have to register, hand over your email address or any other personal details, and there's no login required. All you have to do is choose your server from a list, click Connect when you're ready, Disconnect when you're done; it couldn't be much easier.

The developer's website also offers VPN apps for Windows, Mac, Android and iOS, and we'll talk a little more about those later, but for this review we're going to focus on the Chrome extension.

FreeVPN Proxy works by redirecting your internet traffic through an HTTPS connection, preventing local snoopers from intercepting your data when you connect to public Wi-Fi hotspots or other potentially insecure networks.

This doesn't guarantee your anonymity, of course, because your traffic is being redirected through a server chosen by the developer. Could this be logging your online activities?

The extension's Chrome store page claims that 'no log is saved from any users'. That's an encouraging start, but we would normally try to verify this by checking a provider's privacy policy, and FreeVPN Proxy doesn't have one, at least as far as we could see.

This isn't unusual with proxy apps and extensions, but it's still worth trying to find out more about the developer, in terms of discovering how competent and trustworthy the company might be. We headed off to FreeVPN Proxy's website, www.freevpn.pw, to try and find out more, but were quickly disappointed.

The site was very basic: little more than a single web page with descriptions of individual VPN apps. It included links to install the Android app and Chrome extension outside of the app store, a very bad idea in terms of security. And rather than HTTPS download links pointing to the same domain (www.freevpn.pw/freevpn.apk), the site uses HTTP links pointing to bare IP addresses referring to a separate website (http://1*4.1*5.2*4.37/dl/freevpn.apk), leaving us with no idea what we might be downloading, or from where.

The confusion continued when we tried to find out who was behind the site. Although the website was www.freevpn.pw, the copyright and email message points to Tigervpns (not TigerVPN, an entirely legitimate commercial VPN service from Slovakia). A caption refers to Tigervpns (UK), and a Tigervpns Ltd Facebook page refers to FreeVPN Proxy as a new service it has built. But there's no mention of anything else the company does, and the two company domains – tigervpns.com and tigervpn.co – don't host any website.

Having a developer that is part of a UK limited company sounds reassuring, but we wanted to find out more. Browsing Companies House revealed that Tigervpns Ltd is registered as a UK company, but the director and shareholder is named as Jiazeng Wang from Shanghai, China, and as we write Companies House lists it as 'non-trading' and apparently based at an accommodation address.

Maybe there is a good reason for this. Perhaps the developer wanted to do something with the company and just never got around to it. But it's also possible that the company is being used to make it appear that the VPN has a UK business behind it, rather than being the product of an individual from China.

Searching for references to Tigervpns.com revealed that the developer is also behind the Chrome extension FreeVPN Proxy by HideMe (not to be confused with Hide.me, an entirely legitimate commercial VPN provider).

HideMe claims to have a website at www.hideme.io. This was dead during testing, but checking Archive.org showed that in 2017 HideMe was saying it had 'invented a new VPN protocol that works great in regions where traditional VPNs are blocked.' Mysteriously, the firm doesn’t seem to explain what this is, or why it doesn’t mention it in the app store pages, or why it isn’t boasting about this breakthrough on security news websites.

Put all this together and the upshot is that we seem to have someone in China setting up a UK company, apparently doing nothing with it, but using its name and UK origin to push VPN products under multiple brands, sometimes with very implausible claims.

There's no attempt to explain this to users, no website with a detailed back story, and no obvious reason why this service is being given away for free. None of that proves anything malicious is happening, but it suggests to us that this isn't a developer who in any way deserves your trust.

Installing FreeVPN Proxy for Chrome works much like any other extension: tap Add To Chrome, wait a few seconds and a new icon appears on the address bar.

Tapping the icon brings up a simple box with a flag top-left indicating the current server location, a Connect button and a link to the freevpn.pw website.

We clicked Connect and watched as – nothing happened. There was no error message, no change in the interface at all. Browsing the Chrome store reviews showed many other users saying the same thing, and some offering very bad advice on how to fix the problem (turn off web protection in your antivirus, disable your ad blocker).

We disabled all our extensions anyway, and that did make a difference. Clicking Connect now appeared to make a connection, although the browser complained that it couldn't access any sites.

Further testing showed the problem was with the default Canada server, which seemed to be dead. It wasn't the only one: we were also unable to access the Netherlands and United Kingdom servers. The only available locations were Germany, Singapore and United States.

Browsing from the working servers produced inconsistent results. Most websites displayed correctly, but some were incomplete or not formatted correctly, and a few didn't display at all. Where there were problems, hitting Ctrl+R to refresh the page would usually fix the issue, though, indicating an intermittent fault like a connection quality problem rather than anything more fundamental.

Running performance checks on SpeedTest.net and Fast.com pointed to similar issues, with speeds varying from 200Kbps up to 50Mbps over very short periods, and with some tests occasionally timing out altogether.

This didn't stop us carrying out many common tasks, and for example we were able to stream HD video without issue, as apparently the player could buffer enough data during the high performance periods to make up for any speed drops. But overall, FreeVPN caused a significant number of browsing issues, and it's not something we would want to use long-term.

We would normally test whether the service gave us access to BBC iPlayer, but as we weren't able to connect to the UK server, this wasn't possible.

To round off the review we ran our regular leak tests. All the servers we could access correctly allocated us IP addresses in the promised locations, and there were no DNS or WebRTC leaks that might give snoopers any clues to our real identity.

This is an unimpressive proxy app from a developer who gives no reason to trust him, and plenty of reasons why you shouldn't. If you're even slightly concerned about privacy or anonymity, use something else.