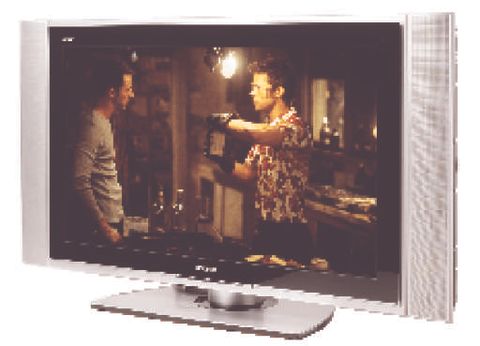 Take the speakers off, and its looks improve

Okay for HD but lacks versatility

The T37W81S' looks give a clue to its performance: a black glass surround gives the screen a stylish floating effect, the modernist aluminium desktop is a good-looking addition but its speakers look cheap. This is a flatscreen that gives with one hand, only to snatch back with another. Except for being HD-ready, there's a lack of features. Sockets are stingy, with only one HDMI and two Scarts (only one is RGB-capable), composite video, VGA, and analogue audio inputs.

While having one HDMI was understandable last year, with the launch of Sky's and Telewest's high-definition services, HDMI DVD players and next-generation games consoles - all of which use HDMI connections - two HDMIs is the minimum we expect to see on any HD-ready TV. Especially as flatpanels costing far less than this one have managed this feat.

With the feature set being a disappointment, it's down to the picture and sound to impress. Describing high-definition footage as vibrant, sharp and detailed is becoming a cliché, but that's the case here. Fast-moving scenes can break apart and there is some shimmer, but the problems are minor and don't detract from what's onscreen.

The major disappointment comes from the set's low contrast range, which leads to shadows lacking detail, and scenes missing out on depth and a solid 3D feel. Placing a black frame around the screen, in theory, fools viewers into thinking the picture has deeper blacks than it actually has, and therefore a deeper contrast range. Unfortunately for Lexsor, this doesn't work as this set has an extremely bright backlight.

Standard-definition footage suffers from poor treatment at the hands of this TV. Playing Fight Club at standard-definition revealed colours that were drained of life, high levels of noise across the screen, judder, and a general softness. Things get worse in low-light scenes, with the noise ruining the image and detail becoming lost in the mush.

The ugly, detachable speakers provided a decent stereo track, yet dialogue lacks definition. Though for those concerned with the set's aesthetics, we strongly recommend removing the speakers, putting them somewhere out of sight, and adding a surround sound setup.

While the 37W81S offers a high-definition performance on a par with its peers. The bad news is it also offers poor connections, lacklustre sound and lacks a digital TV tuner. Those who want a TV for watching only HD will like this TV, but its poor handling of standard-definition footage, its poor range of sockets, and its missing digital tuner, means it lacks versatility. What Plasma Staff