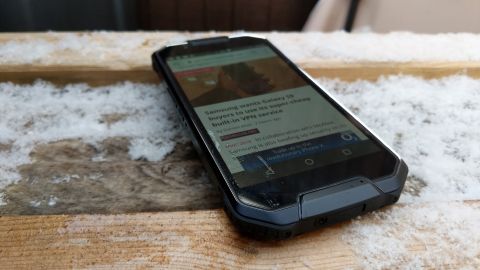 The AGM X2 offers some unique features for a rugged smartphone in this price bracket like a VOC detector, Qualcomm CPU and true dual-lens cameras at the back. But there are certainly flaws in terms of the design and lack of 802.11ac Wi-Fi.

We’ve had a fair number of rugged smartphones in for review over the past 18 months, but few have got us buzzing as the AGM X2 did. The follow-up to the X1 was announced in the second half of 2017, but getting hold of one has been tricky to say the least.

Online Chinese retailer, Gearbest, sent us the sample and sells the AGM X2 for just over £380 ($530) at the time of writing. The 128GB model costs a staggering £440 ($610). Note that, while this price includes delivery, it is exclusive of any taxes that may be levied by HMRC or the courier companies on behalf of the vendor. Want to buy tech from online Chinese retailers? Read this first.

AGM is one of the forerunners in the crowded rugged mobile market and doesn’t manufacture anything else. Will the innovations of the X2 be enough to fend off competition from the likes of the Doogee S60 or the Vernee Active? Read on to find out.

The argument for having a poor screen-to-body ratio is that in return you get more material around the fragile bits (i.e. the screen) to cushion any fall – and that’s particularly noticeable at the top and bottom of the X2. We’ve no complaints here, though, as this is an IP68-rated smartphone which is also MIL-STD-810G certified.

Look at the device from the front and you’ll notice a status LED, a rather big 16-megapixel front-facing camera sensor, and a chrome border. The screen is not oleophobic and is a worse fingerprint magnet compared to, say, the cheaper Vernee Active. There’s no physical home button or dedicated capacitive buttons like the X1.

A headphone socket and a Type-C USB port can be found at the bottom and top of the device, with a dedicated camera button and the volume rocker on the left, and the power button, SIM tray and the VOC sensor on the right.

On the rear you’ll find two 12-megapixel camera sensors, a big LED flash, the AGM logo, a square fingerprint sensor plus a small speaker grill. What irks us is the presence of a glass panel that is not only a fingerprint magnet, but is also likely to break or get scratched.

Overall, AGM’s new X2 sports a very different design from the previous X1, and between the two, we definitely prefer its predecessor.

The X2 stands out from the competition because it uses a Qualcomm processor rather than the cheaper MediaTek parts. The X2 uses a Qualcomm Snapdragon 653 which is a tad faster than the one used in the X1 – the GPU speed is also higher which should translate into faster graphics performance.

It was the first device amongst challenger brands to sport 6GB of RAM (LPDDR3) and 128GB on-board storage. Being first meant having premium prices as well, which partly explains why it is twice as expensive as the Vernee Active.

Given this phone’s price, it is not surprising that it boasts one unique feature, a VOC (Volatile Organic Compound) sensor which is useful for those working in areas with potentially high levels of noxious gases.

But that’s not all: there are three cameras from Sony and Samsung here, along with a Samsung Full HD 5.5-inch AMOLED screen, a massive 6,000mAh battery and the ability to run two SIM cards or one SIM card and one microSD card. There’s also NFC support but oddly no 802.11ac Wi-Fi, which is unacceptable for a device aspiring to be a top-end contender.

Speaking of connectivity, other than Bluetooth 4.0, the X2 supports GPS, GLONASS and Beidou as well as all the main global bands (including the all-important B20 band). Note that, as mentioned, you won’t be able to run two SIM cards with a microSD one.

Here’s how the AGM X2 performed in our suite of benchmark tests:

The X2 performed consistently better than most of the MediaTek-powered ruggedized smartphones on the market. Indeed, benchmarking got a little ridiculous at times, with 3DMark Ice Storm Extreme failing to run on the Adreno 510 GPU saying that it’s simply “too powerful”.

As expected, this device runs Android 7.1 and has a few bundled apps like AGM Air (for the VOC sensor) and AGM tools (which is a suite of, err, features that handymen – and women – might use, like a protractor, loupe and so forth).

The high-end of the ruggedized mobile market is busier than ever before. The Doogee S60, the Vernee Active and V2, the Ulefone Armor 2, the Blackview BV9000 Pro and the Snowpow M10W can all stake a claim to the crown of best top-end rugged smartphone – but the X2 shines for several reasons.

However, the sad truth is that pricing is not one of them. That said, none of the competition has three camera sensors, a VOC sensor or a battery which is this big.

The AGM X2 is the antithesis of the X1 in terms of design, but stands on its own with several unique features. Indeed, if you want or need a VOC sensor/meter, then there’s simply no alternative on the market. The X2 shares some of the strong selling points of the Cat S60 (with its IR sensor). However, the lack of 802.11ac Wi-Fi, fingerprint issues, and the inability to run two SIMs and a microSD card simultaneously are hard to stomach – especially at this price.

We fail to understand why the manufacturer swapped the utilitarian rubber back of the X1 for a glossy rear cover which is more prone to scratches. Going forward, it is likely that AGM won’t release the AGM X2 Max, a model that sent our pulses racing when we got wind of its existence at the beginning of 2017.