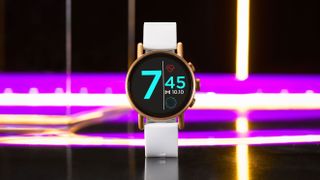 Misfit has announced its latest smartwatch in the form of the Misfit Vapor X, the newest device in the Vapor line after the Vapor 2, and it's arguably Misfit's most premium wearable to date.

The reason we say that is because it runs on the Snapdragon Wear 3100 chipset, making it one of only a handful of smartwatches to benefit from the enhancements the new processor bring.

The main benefit of Wear 3100 is greatly reduced power consumption, so your device should last longer on each charge, but it also brings more accurate fitness tracking and advanced ambient modes. In short, it should be good news for the Misfit Vapor X.

Another change the Vapor X has is in design, as it's metal instead of plastic like on previous Vapor wearables.

Here, there's an aluminium alloy case, which at 12mm is thicker than the Vapor 2, although coupled with its new Sport Strap+, Misfit claims the Vapor X is its "most comfortable smartwatch ever".

The Misfit Vapor X runs Google's Wear OS operating system, as previous Vapor watches have, and it comes with many of the same features too, like fitness and heart rate tracking, water resistance and swim tracking, rapid charging, plus 4GB of storage and 512GB RAM. There's NFC too, allowing for contactless payments with the watch.

In fact, in terms of functions it's pretty much identical to the Vapor 2. The main changes you're getting here are the metal design and the new chipset, which should keep the battery going for longer.

We haven't tested out this watch yet, but when we do we'll let you know our full thoughts on it, so stay tuned to TechRadar to find out how good the Misfit Vapor X is.