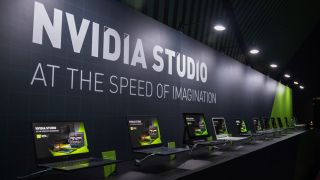 In total, 10 of these portable powerhouses were revealed over at Siggraph 2019 in LA, with Nvidia RTX Studio notebooks coming from every major laptop manufacturer (meaning there are now 27 machines in total in the RTX Studio line-up, with eight of these currently available).

The 10 new products will run the gamut from consumer laptops using RTX 2060 graphics cards, up to turbocharged mobile workstations which have Quadro RTX 5000 GPUs.

Nvidia picked out some specific models, including the Lenovo Legion Y740 Laptop Studio Edition which will come in 15-inch and 17-inch flavors running with GeForce RTX 2080 GPUs, and will launch this autumn.

Lenovo ThinkPad P53 and P73 mobile workstations will be available sooner in August, in the same sizes, but equipped with up to Quadro RTX 5000 graphics solutions.

HP will have the ZBook 15 and 17 mobile workstations, also with Quadro RTX – and the 17-inch version will allow the buyer to specify up to a Quadro RTX 5000.

Dell will offer Precision 7540 and Precision 7740 mobile workstations which again will be configurable with up to Quadro RTX 5000 GPUs.

These notebooks come with Nvidia’s Studio Driver, built for stability and reliability, and optimized for heavyweight software packages like Blender, Autodesk Arnold, Maxon Cinema 4D, Substance Painter by Adobe and more (but lacking all the latest tweaks for games, as seen in the more regularly updated Game Ready Driver).

A key aspect here is that the latest version of Studio Driver now supports 30-bit color in OpenGL applications like Adobe Photoshop and Premiere on all GPUs – meaning not just Quadro graphics cards as was previously the case, but now GeForce models.

So, GeForce-powered notebooks can now work on media content with fully accurate colors, without suffering the banding that can be seen when using 24-bit color.

This is a sizeable step forward, and a major benefit for those who are running with a GeForce GPU in their RTX Studio laptop, rather than stepping up to an expensive Quadro solution.

According to Nvidia’s own testing with Autodesk Arnold, a laptop equipped with an Intel Core i7-8750H processor with a GeForce RTX 2080 Max-Q GPU offers performance levels of up to 7x faster than a 15-inch MacBook Pro with a Core i9 CPU and Radeon Pro Vega 20 GPU.