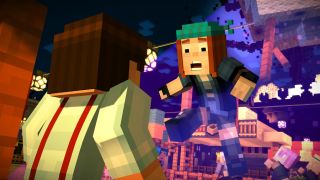 Netflix has expanded its offering of 'interactive storytelling' with Minecraft: Story Mode, a choose-your-adventure story developed by Telltale Games.

Minecraft: Story Mode isn't a video game, or really a television show, but an interactive branching narrative whose outcome is decided by the viewer's choices at key points in the story.

The series is based on Minecraft, the bestselling crafting sandbox game that's driven by user-created content – fitting then to make the TV spin-off an interactive affair.

The first three episodes of Minecraft: Story Mode landed on Netflix on November 28, with another two episodes to follow on December 5.

You can find it on the Netflix browser or iOS app, though there's a standalone Minecraft: Story Mode app for those on Android smartphone or tablet devices.

More recently, Telltale has been in the news more for the games it isn't making, than the ones it manages to put out.

The California-based game developer expanded dazzlingly fast over the past few years, putting out episodic tie-in games with the likes of The Walking Dead, Batman: The Telltale Series, and Tales from the Borderlands.

This September, the studio announced it was laying off 90% of its 250 employees and canceling many titles still in development, after sales of various properties didn't meet company expectations.

Netflix had also planned a Stranger Things interactive series in partnership in Telltale, which is reportedly still going ahead with a different studio, with a Netflix spokesperson saying "We are in the process of evaluating other options for bringing the Stranger Things universe to life in an interactive medium.”

There's currently no official word on whether there'll be more Minecraft: Story Mode seasons down the line.