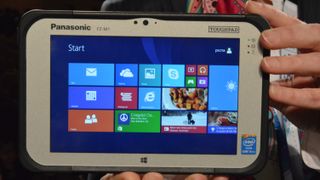 Panasonic is sticking with business-to-business tablets for the foreseeable future, even though the company announced a size many consumers would eye at CES 2014.

The 7-inch Toughpad FZ-M1 is a Windows 8.1 Pro ruggedized machine designed to tough out the elements, dunks and drops, and the wear and tear of time.

A consumer may fancy the new, fanless Toughpad, but Panasonic Device Product Manager Dan Diliberti told us that's not the the company's focus.

"If there's a consumer who has those requirements, then it might be a fit for them," he told TechRadar following Panasonic's press event. "But that's not our target. We're a business-to-business focused company."

It's a message the company has told us before, and one we're likely going to hear again and again, even as it introduces more form factors to its rough and tumble tablet line.

The Toughpad FZ-M1 is thin for a machine designed to withstand 5-foot drops, but it's still got a girthy 0.7-inch frame. It's features are configurable, though the standard version packs a 4th generation Intel Core i5 vPro processor. Those with cost concerns can grab the tab with an Intel Bay Trail-M chip.