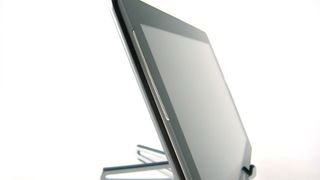 It ain't Clover till it's Clover

For some time we've been hearing that Samsung would switch from its ARM chip and over to Intel's Atom processor for the Galaxy Tab 3 10.0, which we're hearing could break next week.

Now sources speaking to Reuters have backed this up, claiming that at least one version of the 10-inch slate will be powered by Intel's x86 Atom Clover Trail+ architecture.

Enter Korea Times, which is reporting the same information, backed by an anonymous Intel employee claiming that there's been a large increase in Atom engineers in the last year - up from six to fifty.

While a surprising move for Samsung, the Korea Times claims that this is Samsung's way of playing it safe and stabilising production.

We don't know a lot else about the tablet, though we expect it will be using an LCD display and not going AMOLED.

We expected the Tab 3 to make its debut at Samsung's big June event, but word is that Samsung will be making the reveal at Computex, which kicks off on June 4. TechRadar will be there to cover it if and when it drops.