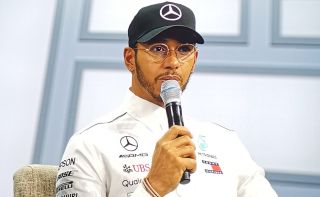 Lewis Hamilton has praised the effect that technology has had on Formula 1, hailing it as one of the “most exciting” aspects of the sport today.

Speaking at a media session at the HPE Discover event in Madrid yesterday, the recently-crowned five-times Formula 1 world champion told TechRadar Pro that the relationship between sport and technology has never been more important, particularly as breakthroughs first seen on the racetrack continue to trickle down to modern road cars.

“It’s been amazing to see,” he said, “when I first started out in karting, it was obviously very basic, but then as I progressed to cars tech became a key factor.

“When I got to Formula 1 and saw how much technology is used, for example using the robot in building the engines, it’s fascinating - they plug a bunch of digits to the software and it churns out this incredible piece of work.”

“I remember flying to Boston in 2009 for the first time to see the new technology with batteries, and I remember going and seeing the process for that, and now seeing how that technology has evolved into road cars to become a massive part of the future.”

“It’s fascinating to be a part of it...the driving part is really the coolest part for me, but going to the factory and seeing the work of all these individuals and seeing the evolution of the technology is just as exciting.”

During a separate fireside chat at the event with HPE CEO Antonio Neri and Mercedes F1 team boss and CEO Toto Wolff, Hamilton reminisced about his unlikely past as an IT worker.

"I used to do IT,” he told Neri, remembering how at the age of 18, he  worked for his father’s IT and network  support firm in Stevenage, and he recalled travelling to London to visit the headquarters of major tech firms and touring various server rooms toi do test runs on mainframes.

Hamilton also called out the lack of diversity in the technology industry, noting to Neri that, “There's a lot of men (here), it's not very strong on the women front, why is that?”

The remark clearly took Neri by surprise, as he replied, “we have a problem here,” before highlighting the work HPE is doing in attempting to improve this.