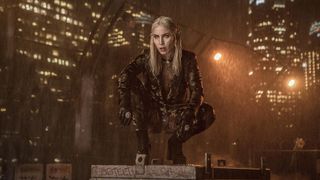 We've been following Bright, the upcoming Netflix Original that re-teams Will Smith with his Suicide Squad director David Ayer, for a long time now. Thankfully, the wait is almost over, with the fantasy/cop movie mash-up set to drop on the service on December 22, 2017.

Looking like a cross between Ayers' own police drama End of Watch and The Lord of the Rings (with a dash of Shadowrun thrown in for good measure), Bright sees Smith partner with the world's first Orc police officer to retrieve a an incredibly powerful magic wand before it gets into the wrong hands.

While the trailer, which you can watch below, features some rehashed material, it does offer a better look at Noomi Rapace's warrior priestess character –though we still don't know which side she's on.

We also get an exclusive first listen to 'Crown' – a new song from the Bright soundtrack performed by Camila Cabello & Grey. If that song isn't your cup of tea, Edgerton's character has an Orc love song that you might enjoy...