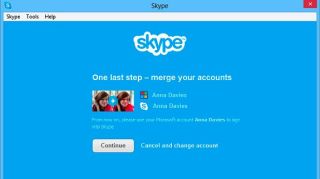 Microsoft announced Tuesday that it's retiring Windows Messenger in favor of Skype, just one day after a report surfaced that it was considering such a move.

"We've got good news to share!" a Skype blog exclaimed. "Skype and Messenger are coming together."

Microsoft will discontinue Messenger in all countries worldwide in the first quarter of 2013, except in mainland China.

The transition away from Messenger began several weeks ago, Microsoft noted, with the release of Skype 6.0 for Mac and Windows, an update that lets users sign into Skype with a Microsoft account.

Microsoft tried to soften the blow to Messenger users as much as possible by reiterating the simplicity of making the switch.

All it takes, the company said, is an update to the latest version of Skype and sign up through a Microsoft account. Once those steps are complete, users' "Messenger contacts will be there."

"We will work with you over the next few months to help you transition and offer information and help along the way," Microsoft assured.

For those among the over 100 million Messenger users not quite ready to make the Skype migration, enjoy the last few months with the IM service while it's still around.