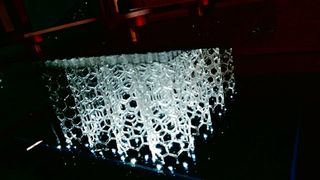 A new 3D printer is using innovative technology to be the fastest device ever when it comes to printing speeds for larger objects.

Known as the HARP printer, an acronym for ‘high-area rapid printing’, the device has a print bed with a footprint of 2.5 square-foot and is 13-feet tall, and it can print an object the size of an adult human in a couple of hours (Madame Tussauds has probably got its order in already).

Specifically, it’s capable of printing objects vertically at a speed of half a yard (just under half a meter) per hour, which represents a record level of throughput in 3D printing.

HARP has been developed by researchers at Northwestern University (Illinois), and one of them, David Walker, observed: “Obviously there are many types of 3D printers out there – you see printers making buildings, bridges and car bodies, and conversely you see printers that can make small parts at very high resolutions. We’re excited because this is the largest and highest throughput printer in its class.”

HARP uses a new version of stereolithography, a 3D printing process whereby liquid resin is cured and hardened into a solid object by projected ultraviolet light, which became more widely-known around four years ago.

The problem with conventional printing methods is that resin-based 3D printers generate a great deal of heat. The faster the device prints – and the bigger the object is – the more these struggles with temperatures becoming increasingly difficult to manage, leading to the printed object potentially ending up deformed or cracked.

Scientists at Northwestern University overcame these heat-related issues by using a non-stick liquid which has been dubbed ‘Liquid Teflon’. Essentially, HARP projects ultraviolet light through a window to harden the resin on a vertically moving plate, and the Liquid Teflon flows over that window, removing heat and subsequently circulating it through a cooling unit.

In other words, a ton of heat is still generated, but the researchers have found a very efficient process for removing it.

James Hedrick, another researcher on the project, further noted: “The interface is also nonstick, which keeps the resin from adhering to the printer itself. This increases the printer’s speed by a hundredfold because the parts do not have to be repeatedly cleaved from the bottom of the print-vat.”

HARP has the potential to revolutionize large-scale manufacturing, because existing big 3D printers are of course capable of producing large parts, but they must be machined (or sanded down) for the final finishing process. HARP, however, can make ready-to-go large parts without any extensive post-processing – because it uses high-resolution light-patterning to achieve a finer finish in the first place.

Chad A. Mirkin, who led HARP’s development, enthused: “When you can print fast and large, it can really change the way we think about manufacturing. With HARP, you can build anything you want without molds and without a warehouse full of parts. You can print anything you can imagine on-demand.”

HARP should be commercially available in the next 18 months, or at least that’s the timescale Northwestern University is estimating.