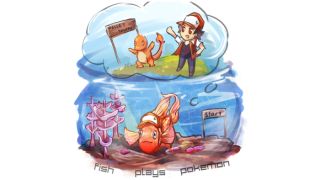 Holy crap this is adorable

The internet came together to collectively play Pokémon games this year using special software that let viewers on Twitch input commands via the site's chat box.

Now that these fanatics have played through every generation of games in the series, though, they've passed the torch to a fish. Yes, really. It's called Fish Plays Pokémon.

A Betta fish, Grayson, is being motion-tracked, its movements translated into commands for Pokémon Blue version. Given the randomness at play, it seems doubtful that Grayson will ever beat the game, but nevertheless there were as many as 20,000 people watching simultaneously today.

If only Grayson could play a modded version of Pokémon where the towns are inhabited by fish who capture humans in little balls and make them fight one another. At least the creators, university students Catherine Moresco and Patrick Facheris, are accepting donations to upgrade his tank.