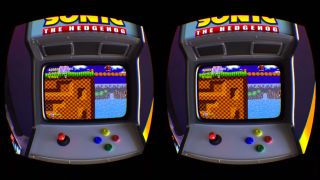 While gamers the world over excitedly await their chance to get lost in all that virtual reality has to offer – new worlds to explore and new experiences to, er, experience – Oculus has released a gaming app that it's probably fair to say won't have people rushing out to buy a VR headset any time soon.

When people ponder the ultimate virtual reality experience, we doubt their first (or even last) thought is of playing Pac-Man in some underwhelming arcade recreation – a 10 best VR games contender it is not.

But that's what Oculus has delivered in the form of Oculus Arcade, an app that works on the Samsung Gear VR headset and compatible smartphones, and will also work on the upcoming Oculus VR headset.

So this is the future?

The title places you in an arcade with a number of vintage gaming machines that you can stand at and play.

Here's hoping gaming's future soon looks less like it's just gaming's past with additional technology strapped to our heads.

Check out the video below.