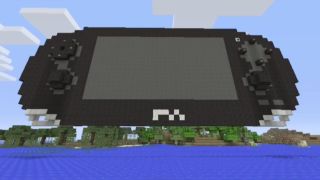 4J Studios has managed to shrink down the insanely popular Minecraft into the PS Vita, and Sony's just released a new trailer to show us what it's going to look like.

In sum: impressive. The sandbox title looks as familiar as ever, and the best news is that it should be available later this month.

Minecraft on Vita will be a Cross-Buy title, so if you've already bought it on PS3 then you'll get it for free. There are also PS4 and Xbox One versions on the way, which you'll be able to upgrade to for a small cost.

And for those of you that have burned hours of time building lifesize replicas of the Starship Enterprise, fear not: your creations can be transferred from the PS3/Xbox 360 to the PS4/Xbox One. However you won't be able to send them the other way as the new-gen consoles are capable of rendering larger worlds.