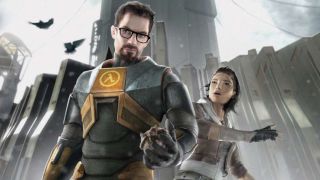 On 10th October 2007, Valve released Half-Life 2: Episode 2, the continuation of Gordon Freeman’s story as he and his friends fought to free the human race from the oppression of the alien Combine. The ending provided very little in the way of closure, setting up a number of plot points for Half-Life 3 - a sequel that has never arrived.

With the exception of 2011’s Portal 2, the Half-Life universe has remained completely dormant for almost ten years, which is a shame when Half-Life and Half-Life 2 are generally considered to be two of the best games every made.

Valve has been quiet about the franchise’s future, leading to the popular 'Half-Life 3 confirmed' meme, where any small hint of the sequel's existence is quickly spun out of proportion.

That said, the company hasn't been completely silent. So we've gathered everything we currently know about Half_Life 3 into this handy guide.

Back when Valve announced Half Life 2 would be getting episodic sequels, it revealed that there were plans to release three of them over the course of the following few years. They would together form what was essentially a third Half Life game. The idea was that development on an episode wouldn’t take as long as a full sequel, so fans could continue Gordon Freeman’s adventure sooner - albeit in smaller quantities.

Half Life 2: Episode 3 was never released, and over time people eventually just started referring to it as Half-Life 3 - assuming that Valve was working on a fully-fledged sequel rather than a brand new episode. This is tenuously corroborated by leaks and a statement from Gabe Newell declaring that the developer was done with the episodic model as players know it.

But as one anonymous source told Game Informer, there is no such thing as Half Life 3. Not according to Valve anyway. The company announced three additional episodes, two of which have been released, and nothing more. The source referred to the constant talk of ‘Half Life 3’ as both a fantasy and wishful thinking.

Whether it’s referred to as Episode 3 or Half Life 3, people are talking about the same thing - a sequel to Episode 2 that will continue the story and solve the cliffhanger ending we were left with.

What Valve has told us

While Valve has been very quiet the past several years, in the years before (and just after) the release of Episode 2, it was more forthcoming with information. How much of it is still relevant is unclear, but Gabe Newell did confirm that players would retain control of action hero physicist Gordon Freeman. He later stated that Gordon would go unchanged in Episode 3, so he would “largely remain an arm and a crowbar”. Newell also confirmed that he will never speak, since his companions are a “more fruitful avenue to explore”.

Doug Lombardi, Valve’s VP of marketing, also confirmed that the story would not return to City 17, and that the developers had put a lot of work into "creating a natural progress of topography and climate".

Newell also confirmed that Episode 3, as it was then known, would finish the story arc that began in Half Life 2. While he spoke of the possibility of a fourth episodic instalment, he confirmed that it would be stand-alone and developed outside of Valve. It was later revealed to have been in development at Dishonored developers Arkane Studios and titled Return to Ravenholme. Unfortunately it was cancelled.

Former franchise writer Marc Laidlaw also confirmed to PC Gamer that Episode 3 wouldn’t have had a definite conclusion, much like Half Life and Half Life 2. The plot summary that he later released appeared to confirm this.

Instead the game would keep things open so that a new team could eventually develop sequels. Laidlaw also claimed to have “no idea” if the game would ever get released or not.

Although the writer referred to the post as a 'fanfic' it's pretty clear that the post is a thinly veiled plot summary of what would have been Half-Life 2: Episode 3, albeit with most of the name's changed and everyone's gender's reversed.

If you'd like to read the post with the name's and gender's corrected then you can do so on GitHub, where someone has transcribed the whole short story.

Although it's worth reading the post in its entirety, it appears the plot of the game would have followed Gordon and Alyx as they journeyed to the Borealis, which would have been found to be phasing in and out of existence. After a protracted fight they would have eventually have rigged the ship to travel to the heart of the Combine empire and explode, thus freeing the human race from their enslavement.

Like previous Half-Life games, Gordon would have been left in limbo, saved from the explosion by the Vortigaunts.

Despite the fact that Valve has seldom spoken about Half Life 3, let alone released gameplay material, we have had a fair bit of concept art hit the net over the past decade. While it’s not quite the same as in-game renders of a trailer, it’s still something. Normally it might give us some hints at what to expect, but given the amount of time since the art first surface, the nature of the game could have drastically changed.

The first pieces arrived online in 2007 and 2008, showcasing some of the possible settings:

Some more concept art arrived in 2012, and if legit shows off a wide variety of environments the players can explore.Valve has yet to comment on its validity, and since it’s usually quite quick to dismiss fakes this has led some to speculate that this is the real deal.

"I don't think I can talk about that, to be honest," he said. "I think it's kind of public knowledge that people know that it is being worked on. And so if I were to say that, yeah, I've seen some images, like some concept art of it, that wouldn't be big news to be honest. I guess I could say that I did see something that looked kinda like in the Half-Life universe.

And I mean it wouldn't surprise anyone if I said they're doing it, they're working on it, yeah. So to go out on a limb I'd say I did some concept art for Half-Life 3."

March 2008 also saw the release of what appears to be Alyx Vance concept art on the Picasa page belonging to Valve illustrator Andrea Wicklund. The images were quickly removed, but not before being saved and redistributed elsewhere.

Fans have been pestering Gabe Newell and Valve over the years, getting more and more creative as time goes on. One interesting method from the Seven Day Cooldown podcast is notable because it actually got a response from Newell. All they had to do was ask about a sequel to Ricochet - a game often considered Valve’s worst.

"In terms of Ricochet 2, we always have this problem that when we talk about things too far in advance, we end up changing our minds as we're going through and developing stuff, so as we're thinking through the giant story arc which is Ricochet 2, you might get to a point where you're saying something is surprising us in a positive way and something is surprising us in a negative way, and, you know, we'd like to be super-transparent about the future of Ricochet 2. The problem is, we think that the twists and turns that we're going through would probably drive people more crazy than just being silent about it, until we can be very crisp about what's happening next."

And after he was asked if the project had slowed down:

While Newell could sincerely be talking about a sequel to Ricochet, everyone has assumed he played along with the joke and was actually talking about Half Life 3.

In January of this year Gabe Newell went onto Reddit to take part in an AMA (Ask Me Anything), which fans naturally used to ask some questions about the future of the Half Life/Portal universe. He did answer a few of them, though he didn’t reveal a whole lot.

He expanded upon the previous answer when someone tried to further explain it.

Other Rumours and Speculation

One big possible plot point that has popped up over the past decade is that Valve were looking into incorporating a deaf character into the series. It was designed as a feature to better support hearing impaired players, with Newell suggesting that Alyx Vance may have had a crush on a deaf resistance member before Half Life 2 and programmed Dog with sign language so she could practice. This character ended up elsewhere, and he suggested Alyx and Dog would continue to sign to communicate in secret.

In 2010 Newell also hinted that the next Half life game would return the franchise to its psychological horror roots, exploiting fans’ darkest fears in the process.

It was later suggested that Half life 3 could incorporate elements of multiplayer gaming, after Geoff Keighley revealed Portal 2 will be the last Valve game with an ‘isolated single-player experience’. Newell later clarified this, saying that it didn’t necessarily mean the end of single-player Valve games. He intends future games to involve something called ‘single-player plus’, which include social components that Newell believes increase the value of entertainment.

Game Informer’s source, who supposedly worked for Valve at some point doesn’t believe there will be another Half Life game. They claim that every time a Half Life projects starts gaining any momentum it ends up dying off - a process that makes it harder for something new to take its place. They likened the game to Star Wars Episode I: The Phantom Menace, with expectations so high that the inevitable reaction will be disappointment.

According to them, there are people within Valve who want to use the Half Life IP for various different things, but they were contemplations and never seriously considered by Valve as a whole. Not part of a grand plan, at any rate, since that isn’t how Valve operates.

Game Informer stresses that the information is from one unverified source, so take that information with a healthy dose of scepticism. But what they revealed does make some sense, even if it is a pessimistic view of the franchise's’ future.

The more time has passed, the more Valve has kept quiet about the future of the Half Life franchise. It’s easy to speculate that Valve is perfecting the game, and fine-tuning things as gaming hardware advances, but the reality is that Valve doesn’t really need to make a new Half Life game to be successful. Steam is the most popular digital storefront in PC gaming, and Counter-Strike: Global Offensive and DOTA 2 attract millions of players who in turn purchase in-game items with real cash.

While many game studios need to keep making games to stay afloat, the Steam marketplace means that ultimately Valve does not. What this means for Half Life isn’t very clear. Video games get cancelled all the time, and it’s rare that the general public is ever informed of the news until several years have passed. The best case scenario is that the game remains in active development, but with Valve prioritising its resources elsewhere. The worst, and seemingly most likely scenario at this point, is that it’s dead and will never see the light of day.

But stranger things have happened. Maybe we will see Half Life 3 one day, or maybe we won’t. Like Schrodinger’s cat we exist in a state where either is possible. We just need Valve to open up the box and put our minds at rest.