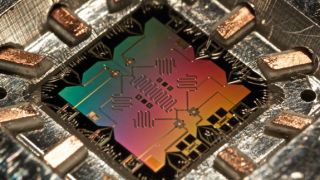 Microsoft has been busy building up its quantum physics lab for a few years now, but a new addition to the team points to its research speeding up.

Since 2006, Microsoft has been dabbling in quantum computing. Its Station Q research group, led by Michael Freedman, has been studying something called topological quantum computing for years now, trying to figure out how to overcome the challenges that this area of computing offers up.

Now this has shifted gear, according to the NYTimes, with the arrival of a new quantum hardware design group, which is being headed up by supercomputer designer Burton Smith, and the hiring of ex-Intel stalwart Douglas M Carmean.

There's still a long way to go before we will see quantum computing in the wild - but when we do, it will be used to power Big Data projects that require huge amounts of number crunching.

Finding a way to make stable qubits (quantum versions of bits) is the key to this happening and this new Microsoft research division will hopefully go some way to realising this.