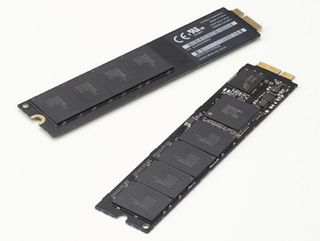 Toshiba shows of its Blades

Toshiba has announced that it is allowing other computer manufacturers to use its Blade X-gale solid-state drives, the small-sized SSD which turned up in the latest version of the MacBook Air.

The SSDs are a mere inch wide and 0.09 inches thick.

The Toshiba Blade X-gale come in 64GB, 128GB and 256GB models and are currently only for OEMs.

So don't expect to be able to buy them in the shops to do some manual upgrades to your very own MacBook Air just yet.

It is nice to see the SSDs out in the open, though. One look at the diminutive you can see how the MacBook Air manages to keep its svelte frame.