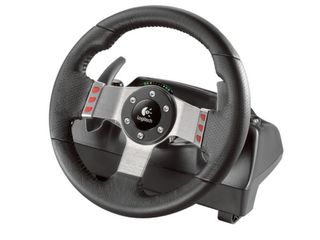 Logitech has unveiled its latest gaming peripheral, with the Logitech G27 Racing Wheel marking a significant improvement on its predecessor the G25.

News of the wheel leaked out back at the beginning of the year, but the company has now confirmed that the Logitech G27 Racing Wheel is coming out for PC and PS3.

The key changes in the latest model are the number of buttons on the wheel, the feeling of the 'shifter module' and the force feedback.

The force feedback has been changed by the inclusion of something called helical gears – diagonal cut instead of the normal spur gears - which reduces noise and brings a greater smoothness.

The wheel, which is leather coated and has stainless steel - along with the pedal and shifter (gear) units has not yet been given a UK release date or price, but it's only a matter of time.