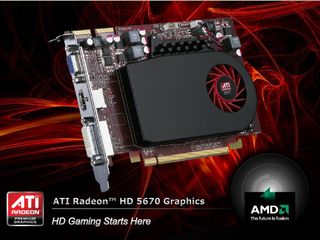 With rivals Nvidia yet to bring out a DX11 card, AMD has been doing well with its ultra-high, high and

end cards in the 5000 series – and it is now bringing out a cheaper version.

The ATI Radeon HD 5670 comes complete with Eyefinity multiple-monitor capability (up to four monitors, but three at launch), and uses 61W maximum and 14W in idle.

"Combined with the successful launches of the ATI Radeon HD 5970, ATI Radeon HD 5800 series and ATI Radeon HD 5700 series, AMD has defined the DirectX 11 gaming experience like no other, bringing graphics innovations like ATI Eyefinity technology and ATI Stream technology to millions of consumers worldwide."

The card boasts compute power of 620 gigaflops, has a core clockspeed of 775MHz and has 400 stream processors.

But it is the DirectX 11 capability which will win the headlines, bringing a cheap option to gamers wishing to take full advantage of the DX11 capacity of Windows 7 PCs.

AMD also announced that the ATI Radeon HD5500 and 5400 series would be 'coming soon'.

The ATI Radeon HD5500 is a low-profile graphics card designed for small form-factor PCs and, of course, media centres, bringing DX11 support, EyeFinity support for up to three monitors, HDMI 1.3a with Dolby True HD and DTS Master Audio.

There is also the ultra-low power ATI Radeon HD5450 which is available as passively cooled, but again with the Eyefinity support for up to three monitors, HDMI 1.3a and Dolby and DTS support.