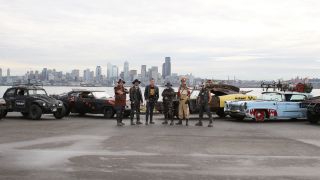 If you're in Seattle right now and in need of an Uber, you might be lucky enough to be chauffeured by your very own War Boy.

As part of a cross-promotion with Warner Bros. for the upcoming Mad Max video game, Uber has deployed a fleet of cars that look as though they've been ripped right out of George R. Miller's hellish universe.

Availability is limited and the cars will vanish on September 1, but if you're lucky enough to score yourself a post-apocalyptic ride in the Emerald City it'll be free. As Uber says, "Your dollars are worthless in the Wasteland".