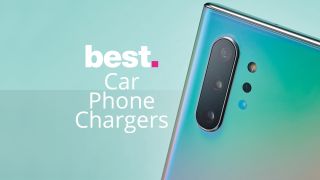 Being able to charge your phone or other mobile device in-car is should be a given, but if you’re short on charging ports, or have an older car with fewer or even none of the available sockets then a phone car charger is the way to go.

These low-budget but invaluable gadgets are perfect for providing power when you’re on the move. The bonus with using a 12V, or cigarette lighter socket in old school terminology, is that it’s usually located in a super convenient place. In addition, it lets you plug in any one of the following accessories to open up multiple charging possibilities. A car phone charger is therefore especially useful if you’re making a journey with multiple occupants.

Even if you're driving solo and just want to keep your phone topped up then the best car chargers are extremely affordable. That makes them a no-brainer in terms of cost versus convenience.

Keep laptops, tablets and phones fully charged on the move

While the Anker USB-C Car Charger isn't one of the cheapest it’s well worth spending the extra in order to enjoy a USB-C power boost. Anker is a well-respected brand when it comes to accessories and its products are, on the whole, well engineered and feature a quality design and build. The Anker USB-C Car Charger is no exception, with a neat line in styling that features a 12W USB 3.0 socket along with the all-important USB-C above that. It boasts 30W of power to get the job done more efficiently. We like the way the device emits a cool blue hue when the power is flowing.

This recently revised model improves performance over earlier incarnations too. As a result, you’re not only able to charge your phone, but you can also re-juice tablets and laptops. The other bonus is that this accessory is so dinky that you’re hardly going to notice it’s there, save for the cable attachments to your many and various devices.

Really, the only downside here is that there are cheaper options as the Anker is pricy for something so seemingly simple. Nevertheless, for convenience and overall durability it’s worth shelling out the extra cash.

A super compact charger for two phones at a time

The RavPower Quick Charge 3.0 might be small, but it’s perfectly formed and also has the benefit of dual ports. That is super handy if you share your car with someone else who needs to charge their mobile device at the same time as you. Despite its diminutive status, the RavPower can deliver a quick charge for your mobile devices, with the twin 18W USB ports working with most handsets.

On a practical note there’s LED illumination that indicates when you have a device plugged in and charging. This is a useful visual aid that ensures a secure connection and gives you a reminder to unplug when you reach your destination. As is also the case with most decent car chargers, the unit comes with charging protection, so you don't inadvertently fry your prized handset. Elsewhere, the RavPower Quick Charge is memorable for its slick and minimal design. It seems to have been put together very well too.

As for performance, the super speedy charging works with a host of smartphones. RavPower suggests a complete charge for the Apple iPhone XS Max will take just over a couple of hours. Better still, it’ll rejuice your other gadgets too, such as an iPad Pro, a GoPro action camera or a Nintendo Switch.

A super-sized phone charger that's a great choice for families

There’s nothing more annoying than having a car full of occupants and not enough available charging sockets. The way around that conundrum is to arm yourself with something like the TeckNet 4 Port Car Charger. It’s an accessory that’s been designed to tackle the issue of multiple recharging requirements.

Simply plug it into your 12W socket in the car and you’ll be rewarded with 5V 9.6A/48W charging for up to four devices as a time, including the likes of the iPhone 11 Pro or Samsung Galaxy S10. It’ll also work with most 5V tablets, although as is the case with all of these accessories you’ll need to double-check compatibility for your own device before you buy.

The LED indicator is a handy built-in feature that lets you ensure that your device is connected successfully, rather than getting to the end of your journey only to find that your phone isn’t charged.

Considering the TeckNet 4 Port Car Charger is pretty cheap it’s been very nicely designed and seems well put together too. In fact, the device exudes an air of quality that some more expensive rivals would do well to follow. And, considering the surface area of the unit offers up four USB ports the charger still fits easily into most 12V car sockets.

In-car charging without the tangle of cables

Do you want to have in-car phone charging but get put off by the thought of endlessly tangled cables? Well, the Choetech Wireless Car Charger is the answer to that annoying issue as it’s a cable-free Qi-Certified recharging solution that’ll work with compatible handsets.

This edition is a newer version of the already popular dashboard accessory and continues with the theme of the original model featuring as it does ease of use and convenience. The device itself attaches to an available air vent, while dropping your handset into the cradle and securing said smartphone is a one-handed affair. Removing it is also refreshingly straightforward. Once your smartphone is in the cradle expect 7.5W fast wireless charging for the likes of the iPhone Xs or iPhone X or 10W fast charging for Samsung Galaxy models. Alternatively, it’s also possible to get a 5W standard charge for something like the Huawei Mate 20 Pro.

The Choetech Wireless Car Charger also impresses thanks to its very accommodating 360-degree ball joint, which lets you get your handset into the optimum position on your dashboard. Depending on your feelings about such things, the Cheotech’s ability to double as an air freshener adds value too, thanks to some included smelly sticks.

Car phone chargers can be handy, but they can also be obtrusive, especially if you have a prominent 12V socket to put them in. So, perhaps the best thing about the Aukey USB charger is that it comes with a flush fit design. What that means is you can plug it into the 12V socket in your car and it’ll live there perfectly happily and never get in your way.

Of course, you’ll still need to plug in a cable to connect your smartphone for charging. Nevertheless, you gain access to a pair of USB charging ports and this brace of re-juicing slots allow simultaneous 5V 2.4A recharging. The unit will work with most popular brands including the Apple and Samsung handsets, and tablets can be recharged too.

Aukey makes things to last and the overall design and build quality of this cheap-as-chips offering leads us to think that it’ll be good for a decent stretch of service. It’s not illuminated but, just like its low-profile design, that might well be a bonus for people who tend to find unwanted lights in the car a distraction. The other added value aspect of the unit being so flush mounted is that you don't stand a chance of catching anything on it and accidentally unplugging the accessory.