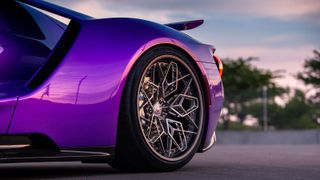 How do you make the McLaren P1 go faster? Certainly not with stripes, but with 3D-printed titanium wheels which are super-light, and therefore help that 3.8 liter twin-turbocharged 903hp engine get up to speed just that little bit quicker.

This just shows the many diverse applications that 3D printing can have, with the technology potentially giving more pedestrian (so to speak) sports cars a boost in the future.

In this case, as spotted by Motor1.com, the McLaren P1’s 3D-printed wheels (see the video below) were fashioned from titanium and made by California-based HRE, which has long been working on fancy wheels.

HRE is, in fact, on its second-generation concept 3D-printed wheels, the HRE3D+ titanium wheel, produced in conjunction with GE Additive.

The wheels feature a carbon fiber barrel with 3D-printed titanium spokes, and on the P1, weigh only a touch over 9kg each. And with lighter wheels, obviously the car can accelerate a touch faster.

Through its partnership with GE Additive, HRE has actually adopted two 3D printing processes in manufacturing wheels for sports cars.

The first is Direct Metal Laser Melting (DMLM) which essentially uses lasers to melt ultra-fine layers of titanium powder, building these layers on top of each other to produce the finished wheel. It’s a process which enables extremely fine detail levels to be obtained, and hence very cool looking wheels.

The second process is called Electron Beam Melting (EBM), which is a refined version of the method used in the first-gen HRE wheels, and uses a beam of electrons to heat and fuse raw metal materials in a vacuum.

The new second-gen wheels are more efficiently produced as well, with HRE claiming that the overall materials waste has been reduced from 80% to just 5% of the raw titanium used.

HRE 3D-prints these wheels to order with a range of color and finish options so you can customize to your heart’s content. The wheels are hand-finished, and the result is pretty stunning – check them out on the aforementioned McLaren P1 in the above video.