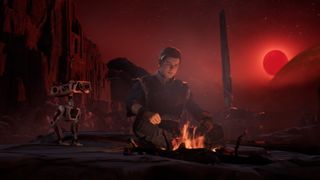 Being a mix of Dark Souls and Uncharted, Star Wars Jedi: Fallen Order throws a number of puzzles into the mix on top of its frenetic combat. You’ll use force powers to control these puzzles, from pushing balls around to pulling on vines and lining up different artefacts.

Early on in Fallen Order, you’ll enter a tomb on the first planet, Zeffo. Unfortunately, the game is often quite lacklustre when it comes to signposting puzzle solutions, so you’ll no doubt fall foul to the confusing ball puzzle that allows you to escape this ancient area.

In this guide, we’re going to show you in simple terms how to escape the Tomb of Eilram on Zeffo, going through each key step in detail.

How to escape the Tomb of Eilram

Keep progressing through Fallen Order until you reach Zeffo and Cal unlocks the Force Push ability down in the Tomb of Eilram. The game will then direct you out into a room you have previously visited, the one where you fought a Tomb Guardian for the first time (the mechanical robots with the blue core.)

You will have previously pushed a giant ball onto a slot to open the way through to the Force Push ability. The whole point of this room is to put three balls on to three slots so that Cal can leave and reach the elevator.

The first thing you have to do is remove the initial ball from its slot and push it down the hill towards where the Tomb Guardian stood. Then push it to the left and into the slot which has a covered roof. This will open a door behind the aforementioned guardian. Head through it and out the other side to find a climbing wall. Keep moving up the wall and squish through the tight bits of rubble. You’ll then see another blue-hued ball. Push it back into the room.

Now that this ball is down, you’ll notice there is wind flowing behind where the first ball is slotted. Push the second ball to the left of the first ball to find a ramp that will take the ball on a track and push it up with wind to the next level above. Then simply climb up and push it into the slot on the second level.

Here’s where it gets tricky. Now you must head back towards where you got Force Push and look to your left to see a room where there’s a ball on a chain swinging. You previously used it to cross the gap on your way through the tomb. Now that you have Force Push, slam the ball against the weak-looking wall to break it and free the ball.

Once it’s free, smash the wall again and it will enter the original room. Push it onto the wind tunnel track like you did for the second ball, but this time it will move through the room you just wrecked with the ball and end up on the platform across from the second ball. It will keep looping if you don’t halt its movement, so use the climbing wall to the left of the first ball slot to get up there and wait for the third ball to arrive.

When it does, use R1/RB to slow the ball and then Force Push it into the final slot. Make sure you’re stood on the platform when you do this and it will lift you up to the top. You’ll see a flayed bit of metal you can push to reach the original elevator which will take you back up to the mainland of Zeffo. Just push the final ball down the track to kickstart the elevator.