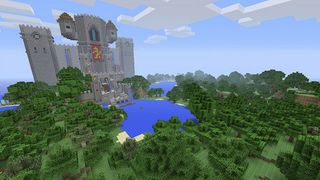 Minecraft has steadily taken over the world since its release in 2009, and has become a runaway success across many different platforms, including the PC, Xbox 360 and PS3.

If you've never played Minecraft before, the basic premise is to mine various materials with which you can build objects in the game world.

There is another side to Minecraft, though, and this is what we are focusing on in this tutorial. Minecraft also has a creative mode, where you are free to build whatever you want, with no monsters or night-time to threaten you.

This is the version that has been made available for the Raspberry Pi. In this version of the game, you're free to build anything you want, just like with a large box of Lego.

Of course, it could become tedious building everything brick by brick, but fear not, because help is at hand, and it's in the form of the Python programming language and we'll show you how to get started.