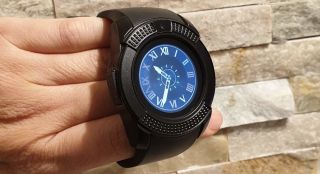 The Leehur V8 is first and foremost a smartwatch, but don’t let its rock bottom price tag fool you, as it can do a lot more than display the time.

We've been using the Leehur V8 for a while to find out what it can do and came out pleasantly surprised - although you just have to recognise its limitations.

Perhaps the most pressing question is "can it make a call?" The answer: absolutely. If you have a compatible 2G-SIM card, you can dial straight from the tiny screen and make a call using the onboard microphone and speaker.

A wonderful piece of technology that shows how far technology has evolved. Something like this would have cost several thousand dollars just two decades ago, but now you can have a mini computer on your wrist that has a camera, the ability to browse the web and a wealth of other features, all for less than the price of a cup of posh coffee. View Deal

We tried the device's Bluetooth functionality, connecting to our smartphone successfully, although you will need to pair the device first, which is straightforward.

Despite having an onboard camera, we didn’t dare try a video call on WhatsApp. The device is likely to be too slow and underpowered for this to be a pleasant experience.

Battery life is one of its weakest points, as the Leehur V8 lasts a day and two on standby. There’s a rubber flap that hides the microUSB port that is needed for charging.

Three watch screens are available; long press the capacitive display (which is non-oleophobic by the way) to swap them. The V8 is available in blue, red, white and black colour schemes.

Other features include a web browser which is, unsurprisingly, very difficult to operate, especially with fat adult fingers. The onboard camera is okay in daylight, but take shots in one direction only. We were surprised to find this smartwatch sports Facebook and Twitter apps as well.

All in all, the Leehur V8 is an impulse buy made for the novelty factor. Don’t expect to use it for anything other than a dinner party conversation piece.