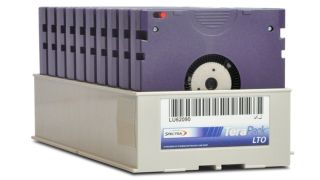 Tapes will make sense to those born in the early 80s but magnetic ribbons have long been replaced by shiny disks, silicon chips and cloud-based storage for whoever wants to store data.

But don't discount them yet. Even if LTO-8 tapes are now in stock, you can buy cheap LTO-7, reformat them to M8 and get 9TB of native storage (22.5TB compressed). You can grab one (HPE LTO 7 Tape with Barium Ferrite (BaFe) C7977A) for just under $59, a price that is unlikely to change even on Black Friday.

With an uncompressed capacity of 9TB, it translates into a per TB cost of $6.55, about 12x less than the cheapest SSD on the market and 1/4 the price of the 12TB Seagate Exos X14, currently the most affordable hard disk drive on the market on a per TB basis.

In other words, if you want a LOT of capacity, then tape is the obvious answer (although truth be said, you also need to factor in the cost of the drive).

But there's something else that tape offers that no other storage medium currently offers and that's on-the-fly, transparent compression which can go up to 2.5:1 and works best on text files (rather than multimedia which is already heavily compressed).

As for transfer speeds, they can reach 300MBps (that's 1.08TB per hour) which is plenty fast, just a tad slower than the just-reviewed PNY Pro Elite which tops 375MBps.

Even though tape has a fuzzy retro feeling to it, it is still the preferred, most widely used archiving medium thanks partly to a 30-year archival life and lifetime warranty on most if not all tapes.

The next generation LTO9 will double the native capacity to 24TB (60TB compressed) and LTO10 doubling it again to 48TB (and 112.5TB compressed) when it reach the market from 2020 onwards.

Just bear in mind that the price above doesn't take into consideration the price of an LTO drive which can cost around $3,000 for a bare internal drive so that it only makes sense to get this if you plan any capacity above 140TB.