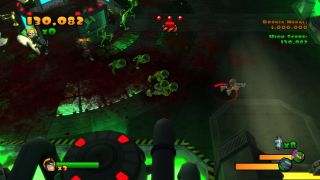 Burn Zombie Burn - a hit for console, but will innovation move to smartphones?

Doublesix CEO James Brooksby has admitted that many games developers are feeling both excited and scared about the arrival of the new Xbox and the PS4.

Brooksby's doublesix has enjoyed success with games such as Geometry Wars: Galaxies and Burn Zombie Burn but the forthcoming arrival of new hardware is a double-edged sword for developers.

"[The industry] is full of excitement and fear in equal measures," said Brooksby at a Westminster eForum. "The step to the next generation of classical consoles brings more fear in a lot of people's eyes.

"The step up may not be as costly as the previous arrivals [Xbox 360 and PS3] but it's still pretty scary to devs and publishers alike.

"I think that people are likely to stick to the proven dev houses for the next generation and that is likely to be a challenge to the UK games industry."

Brooksby believes that small independent developers may well enjoy more success on non-console platforms such as the burgeoning tablet and phone market and the old warhorse that is PC.

"Gamers are almost spoilt for choice and many people will be having a real discussion around their strategies and thinking of new strategies for 2012 and 2013," he added.

"Gamers are moving around all over the place because they have so many options and we need to look hard at where our audience has gone and make games that are appropriate for them.

"Small developers making innovative games on console may become the exception to the rule – but we'll see more of those kinds of stories on tablets, smartphones and the trusty old PC."