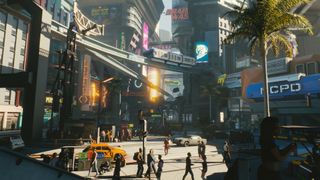 “Nobody ever leaves Night City. Except in a body bag.” Those are the words of Bes Isis, Night City resident, keyboard extraordinaire, and murderer turned network news talking head. Considering we’re visiting those rough and ready streets when Cyberpunk 2077 releases in September, it’s probably wise to have some idea of where we’re heading. It’s not the sort of place you’d want to get lost in.

So we've put together this handy guide to Cyberpunk's Night City based on what we know about the tabletop game, including the city's history, gangs and megacorporations you may encounter.

Night City sits in Del Coronado Bay on the USA’s West Coast, in the Free State Of Northern California. It wasn’t named after nighttime either, but instead after its founder, Richard Night.

Night envisioned a capitalist utopia, and broke away from his company Halsey, Ferris and Night to form Night International. Under this business, construction work began on Coronado City, then named after the bay, in 1992. A year later, megacorporations such as Arasaka, EBM and Petrochem had all heavily invested, buying into Night’s vision of no poverty, no crime, and no laws to impede the ethically dubious work of the Megacorps.

Capitalist gears freshly oiled by workers’ blood, Coronado City became a reality. Before Night could see his experiment to fruition though, he was murdered in 1998 by the organized crime syndicates muscled out of his corporate vision. Coronado City was named Night City in his honour, and quickly descended into chaos.

With Night gone, the gangs and the megacorps openly battled for control. Any notion of a crime-free utopia had vanished like gun smoke, the city awash with greed, violence and desperation. By 2005, the megacorps lost their will to fight, and retreated back to the safe haven of the corporate districts, leaving the gangs to fight each other for control of Night City’s grisliest areas.

This was an uneasy, frenetic time for Night City, with the lawless gangs dividing up what was left of the city for themselves. Somewhat inevitably, a full scale turf war broke out in 2009. The two years between 2009-2011 were the deadliest in Night City’s history, until the Arasuka corporation stepped in with paramilitary intervention to bring down the war with a shuddering crash. Knowing more mob warfare could drive down profits and hurt their bottom line, the megacorps retained a firm grip on the city after the war.

By 2020, when the tabletop game takes place, Night City is in the calm between two storms. By the time we arrive in 2077, the city has been voted “the worst place to live in America,” suggesting that brewing storm is now at its height.

There are tons of gangs in Night City, and while they’re all best avoided, some are definitely more dangerous than others.

Animals
Featured heavily the gameplay we’ve seen so far, the Animals are a melee combat gang addicted to the steroid ‘Juice’. They’re getting high on their own supply too, as big players in the drug racket and the underground fighting rings in Night City. Expect to encounter them a lot during your stay.

Lizzies
The Lizzies are superfans of singer and Night City influencer, Lizzy Wizzy. Imagine if Marnie from Pokémon was covered in chrome and Team Yell were on LSD. They’re minor players with no real territory, but you won’t want to cross them.

Maelstrom
The Maelstrom are a combat heavy gang, formed from the remnants of the Metal Warriors, who disbanded during Night City’s most chaotic times. In the tabletop, they ran the Old Downtown zone around the docks, but by the time we get there in 2077, they’ve moved to the Watson District’s All Food pig slaughterhouse, which is where we’ve seen these brutes in some of the gameplay footage.

Scavengers
We’ve seen a bit of the Scavengers in the released gameplay footage, suggesting they’ll have a big presence in the game. They don’t vie for control, but instead are small time thugs who kidnap people and harvest their cyberwear. Hide your ultra cool chest cannon around these guys.

Tyger’s Claw
A martial arts heavy gang in Japantown, they appear to have ditched their cyberless stance of 2020 to embrace the technology of 2077. Rumored to be backed by megacorp Arasuka.

Valentinos
Not really a gang so much as they are himbos. No violence, no turf, no fighting, just a bunch of bros hellbent on sleeping with every woman in town.

Voodoo Boys
In the tabletop, the Voodoo Boys were the scariest gang in Night City. While they make their money from drugs, they get their fun from rape, torture and murder. Sometimes they mark potential victims’ doors in chicken blood, although sometimes they don’t bother with the warning. By 2077 though, they appear to have changed into guardians of their community, protecting the Haitian community of the Pacifica district.

Yakuza
Violent and merciless, the Yakuza are everywhere in the city, involved in drugs, guns and money laundering.

Though megacorps seem less threatening than the gangs, they might be more dangerous. Here’s what you need to know.

MediaCorps
Network News 54, Diverse Media Systems and World News Service are the three 24 hours news services in Night City; all three are thought to have been bribed by various government officials.

Agricorps
Originally agriculture was small time, family business, until the conglomerates pushed everyone out. These days, the biofuel CHOOH2 is mainly produced by Petrochem, while Russian company SovOil produce inferior CHOOH2 and sell it cheaper.

ManuCorps
These guys really run Night City, and remain unaffected by the turmoil. Arasaka, Militech and Mitsubishi-Sugo feed the military-industrial complex, while EBM and IEC compete for control of cybermanufacture.

CyberCorps
Once the parts have been manufactured, the rest of the cyber cash is split between Zetatech (who deal in software) and Microtech (who create the mainframes and servers). These megacorps keep Night City ticking.

ArmaCorps
Arasaka and Militech are big enough to manufacture weapons and train security mercenaries, while Lazarus specializes in paramilitary contractors.

Night City is a place we can’t wait to explore, especially with Keanu by our sides. Just be careful not to wander down any dark alleys…