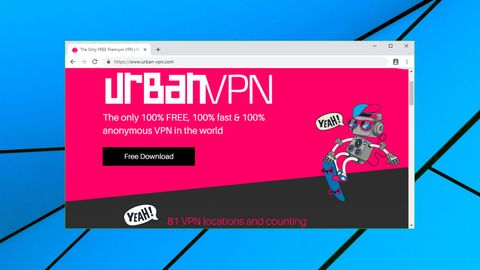 Urban VPN could work as a simple and free website unblocker, but dubious claims and the utter lack of transparency suggest this isn't a provider you should trust.

Opting for a free VPN normally brings you all kinds of penalties, but Urban VPN claims it doesn't have to be that way.

Tap the Products menu and Urban VPN hopes you'll be even more impressed, with free VPNs for Windows, Mac, Android and iOS, a proxy, and browser extensions. But then it starts to get a little odd, with separate listings for a 'Free Netflix VPN', 'Free Instagram VPN', 'Free Reddit VPN', 'Free PC/Laptop VPN', and the list goes on.

Select a few of these options, and you'll find they're not what they seem. The Mac, Android and iOS products are all flagged as 'coming soon', and everything else directs you to install the Windows client or the browser extensions.

Explore the website menus and you'll find another surprise. A 'Why free?' page explains that 'Urban VPN is powered by the Urban VPNr's community (Peer-to-Peer) VPN. ' It claims the company uses a Hola-type system where, once you've connected, your traffic is routed through other users’ systems, and some of their traffic will be routed through yours.

That approach to VPNs brings all kinds of questions. How does Urban VPN encrypt and protect your data? How much of your resources will Urban's apps use, once installed? What happens if another Urban VPN customer uses your IP address to perform some illegal action?

This also left us wondering who was really behind the company. The About page says, 'Urban VPN is a subsidiary of Urban Cyber Security', but there are no links or company information, and Googling 'Urban Cyber Security' mostly just points back to the Urban VPN website and various reviews.

This page reinforced the site's untrustworthy feel with more marketing nonsense, like 'thanks to Urban VPN, millions of users enjoy premium VPN features completely free of charge.' Millions? This would be the Urban VPN which has 25,200 Chrome extension users, and in two months on Twitter and Facebook, has a total of five followers and 18 likes?

If you're genuinely interested in privacy, and understand the trust you're placing in a VPN provider, you should already be running in the other direction. Any free and unlimited VPN is always going to appeal to a lot of users, though, so we were eager to find out more.

The Urban VPN privacy policy seems reasonably well-organized, with details on the data it collects, and how this is used.

The document says Urban VPN collects your IP address when you connect to find your location and provide the service.

An oddly phrased clause says, 'IPs collected for location purposes are deleted immediately following to the completion of use (not stored),' which presumably means they're deleted when you disconnect. But it goes on to explain that the IP collected when using Urban VPN for the desktop will only be deleted 'when you delete the VPN application and cease use of the Services.'

'We collect the URLs of visited websites which in most cases is aggregated Non-Personal Data, however, sometimes Web Browsing Data contains terms that could be considered as Personal Data. This data is deleted a short period following collection.'

We think the company is trying to say that it records the URLs you visit, but doesn't attach them to your account (it'll end up with a list of URLs generated by all customers, but with no way to tell which account visited which sites).

Full URLs can sometimes contain personal information (for example: domain.com/submit?name=this&city=that), and our guess would be that Urban VPN removes that data very quickly, but keeps the anonymized browsing information.

'When you use the Service, we will collect Non-Personal Data, such as technical information automatically transmitted by the user's device (for example, type of browser, the type of operating system, access time and date, approximate geographical location, etc.).'

Overall, this doesn't inspire much confidence. The policy shows plenty of scope for session logging, and as some clauses aren't clearly defined (and the main website leaves us struggling to trust anything Urban VPN says), there may be opportunity for more.

Finally, there's the issue of Urban VPN's peer-to-peer technology. The website EULA gets closest to spelling this out:

"The software may make use of the Internet, among other means by re-routing some of your requests through other peer users. Your free use of the software will in turn enable other devices using the Services to be re-routed through your device. By using the Services you consent to the use of your device in the described manner and agree that other users or services may use your network connection and resources."

But it may not stop there. Companies like Hola and Geosurf don't exist primarily to deliver a free VPN. They make their money by selling access to their users' bandwidth and resources. That doesn't necessarily have any privacy impact on you, but we think it's something Urban VPN should make clear up front, rather than tucking it away in the small print.

Getting going with Urban VPN should have been easy. There's no account to create, no password to remember – just download, install and run the Windows client.

But it wasn't quite that easy, because the installer failed, repeatedly. Close investigation of the Event Viewer showed warnings that Windows couldn't verify the digital signature for Urban VPN's virtual network adapter, and when we checked, we found it wasn't signed at all.

The Urban VPN site claims that: 'We are here to help whenever you need it. You can ask us anything through our live support'. However, this doesn't seem to be true. Urban VPN has no live support, no chat option, no support section on the website, not even an email address to get general help. The site has one or two web forms and email addresses for specific areas (privacy, legal), but there's nothing for actual support.

We headed off to the Chrome extension page to check out the reviews, and found other complaints about the Windows edition not working. An Urban VPN reply said, 'you are welcome to directly install the browser extension without the PC version.' The browser is just a proxy, it only works with Chrome, and is no substitute for a VPN. We would expect Urban VPN to realize that, as well as be a little more concerned about the Windows version 'not working', but apparently not.

Eventually, we did get the Urban VPN client set up on another Windows device. Would everything now run smoothly?

Urban VPN's Windows client is just about as basic as a VPN app can be, with no interface beyond a right-click menu for its system tray icon.

The first right-click displays the five continents: choosing any of these shows available countries, and choosing one of those gets you Connect and Disconnect buttons. And that's it. There's nothing else, no Favorites system to speed up reconnection, no auto-connect option, not a single setting anywhere.

The client apparently connects via OpenVPN. We checked the log to see what was happening, but found multiple errors, including local connection settings which were very different to the server. This wasn't looking like a professional product.

Whose network was Urban VPN using, we wondered? Maybe that would tell us more. We took a look, and found Urban VPN was connecting to servers run by a company called BIScience, which suddenly made a lot of sense. The Urban VPN website said it used a Hola-like peer-to-peer network, and BIScience owns a company, Geosurf, which uses just that type of technology. (It's so Hola-like, in fact, that Hola filed a lawsuit against BIScience in January 2019 for alleged patent infringement.)

We quickly found more links. A key component of Urban VPN's client was copyrighted to Jetstar Media, a company co-founded by BIScience developer Garry Lachman (who also lists 'developing undetectable cryptonight miners' on his LinkedIn page, interestingly). And Urban VPN and Geosurf's websites were created by the same designer, which seems unlikely to be a coincidence.

We moved on to the Chrome browser extension, and found a simple proxy with a location list, an On/Off button, and, unexpectedly, an ad blocker which works independently of the proxy. (A quick look at the code showed more Geosurf links, with references to the same BIScience servers.)

Both the Windows client and the Chrome extension work at a basic level; you can choose a location, click Connect and get a new IP address, click Disconnect and restore the original.

There are no settings, though, or ways to control how any of this works. And, crucially, we see no reason to trust Urban VPN with your browsing, and several reasons why you really shouldn't.

Urban VPN's Chrome extension connected almost instantly, like most proxies. Tests showed no significant change in speeds over our nearest servers, with downloads averaging around 65Mbps. US locations were also speedy, and only some of the most distant connections were below par (Vietnam barely managed 5Mbps).

Website unblocking performance was good, too, with the UK location getting us into BBC iPlayer, while the US location enabled streaming US Netflix.

Speeds dropped significantly with the desktop clients, as UK downloads averaged around 30-35Mbps, and US performance was regularly under 5Mbps.

Once again, though, Urban VPN delivered on website unblocking, and we were able to stream content from both BBC iPlayer and US Netflix.

Free, unlimited bandwidth, and it unblocks US Netflix – Urban VPN has a lot of appeal. But we think trust is vital in a VPN, and Urban's misleading website, poor Windows client, the lack of transparency in who is behind the service and how it works, means it doesn't deserve your trust, or your business, at all.