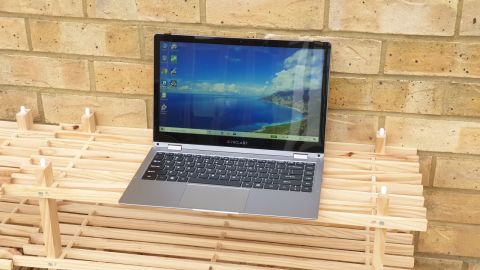 The Teclast F6 Plus is an evolution of the F series. It offers an interesting alternative at this price range with plenty of storage and memory, paired with an average processor. It does have a few niggling issues as we’ve noted elsewhere.

Gearbest sells the Teclast F6 Plus for $319.99 at the time of writing, a price that includes a $10 instant discount. Note that, while this price includes delivery, it is exclusive of any taxes that may be levied by the relevant authorities or the courier companies on behalf of the vendor.

Teclast is one of the few Chinese laptop manufacturers, with Chuwi and to a lesser extent, Jumper, to have featured consistently on Techradar over the past few years. It is interesting to see how their products have evolved over time. We had the F7, the F7 Plus, the X4, the F6 Pro and about a year ago, the F5.

The F6 Plus is a mix of the F6 Pro and the F5, the trio being the so-called 360 laptops in Teclast portfolio; The former has a bigger display (14-inch) than its two siblings (13.3-inch and 11.6-inch respectively). The design philosophy remains the same.

Teclast uses a space grey colour scheme and an all-metal chassis to craft the F6 Plus. The result? A classy, cold-to-the-touch, device that carries a premium cachet thanks to the aluminum alloy material it is crafted in.

It uses two hinges to allow the screen to pivot a whole 360 degrees a la Yoga. As expected the F6 Plus weighs more than your average 13.3-inch laptop at less than 1.6Kg and has a footprint slightly larger than an A4 sheet of paper (320 x 210mm). Nevertheless, it never felt overwhelming thanks to an 18mm thickness.

Underneath is a familiar view; four round rubber feet and a removable cover that hides an M.2. slot which is populated with an SSD already.

The Teclast F6 Plus that was sent to us contained the following specs:

Intel woes when it comes to chip production have been well documented and it comes as no surprise that Teclast - as it is the case for its peers - have had to use a processor from 2017 to power this laptop. The N4100 is a Celeron with four cores, four threads, 4MB of cache and a base speed of 1.1GHz.

That is paired with 8GB of low power DDR4 memory and a 256GB SSD. This being a Teclast laptop, we were not surprised to find that the solid state drive was the NS550-2242, an M.2 Teclast-branded component that is commonly found in other Teclast laptops.

The rest of the specification is resolutely mainstream; a 2-megapixel front facing camera, 802.11ac Wi-FI and Bluetooth 4.0 as well as a 35.5Whr battery. Oh and Teclast bundled a wireless mouse that, in all honesty, isn’t worth more than a couple of dollars. A rather useless goody in our view; a free stylus would have been a much, much better option.

Here’s how the Teclast F6 Plus performed in our suite of benchmark tests:

Novabench: Did not run

The F6 Plus is a mixed bag when it comes to casual usage. The slow processor meant that it struggled in some benchmarks although everyday office work shouldn’t see any major impact. Part of it has to do with the speedy SSD bundled, a far better - and logical choice - than eMMC storage that usually plagues entry level laptops.

One of the highlights of the device was the keyboard; a bigger surface area allowed for a cleaner key setup. Shift keys are well proportioned and there are separate arrow keys and dedicated PAGE UP/PAGE DOWN/HOME/END ones.

Absolutely no flex was detected when touch typing and in general, the typing experience was subjectively superior to anything we’ve encountered in this price range, thanks to good feedback and travel. Not too mushy and not too noisy as well.

The touchpad was still active in tablet mode, not ideal at all. The display is an absolute beauty despite being glossy; 14-inch with a 1920 x 1080 resolution looks great. At 2:51hr, its battery life was less than average; we’d expect far more from a battery of that capacity.

The IPS screen on the F6 Plus is bright indoors, renders colors admirably well and has great viewing angles; it does struggle outside but that’s partly because of the glossy glass touchscreen overlay.

Given the price of the device (just under $320) and its form factor - a convertible chassis - it was always going to be a challenge to find a worthy rival.

The BMax Y13 is probably the closest candidate; it runs on Windows 10 Pro, making it a great choice for businesses and has a backlit keyboard but lacks full-size USB ports, doesn’t support any stylus and, at $370, is a far more expensive proposition.

There is another rival that shouldn’t be overlooked; the Teclast F5 is the smaller version of the F6 Plus and shares a lot of the hardware (always a good way of maximising economies of scale). It is smaller thanks to the 11.6-inch display but is far more expensive as well at around $363. Ouch!

The F6 Plus carries on Teclast’s legacy with aplomb. It is a fine convertible entry level laptop and its biggest issues are its battery life and the processor is quite long in the tooth. Should Intel, the CPU maker, shoulder some of the blame? Probably. Elsewhere the F6 Plus manages to produce an ace spec sheet.

The price tag will entice small businesses and startup owners looking for a real bargain. Yes it doesn’t have the appeal of an Apple MacBook or a Dell XPS but it costs about a quarter as well. 8GB of memory and 256GB onboard storage should be enough for most tasks. Everywhere else is decent and the only real issue is battery life.

All in all, it gets our seal of approval if you are looking for a convertible laptop that goes all the way and doesn’t cost the Earth. And as an added bonus, you can use it with an optional Teclast Stylus.