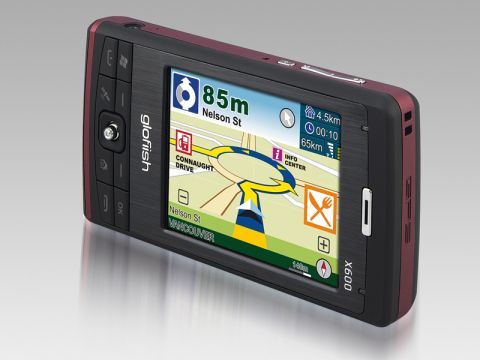 Build quality is excellent, with matt-black plastics that are both tactile and hardwearing

One of the most versatile smartphones around just got even better

The Glofiish X600 (£310 inc. VAT) has a bright and colourful 2.8-inch touchscreen display. With a resolution of 320 x 240 pixels, images appeared crisp and there's plenty of space to view documents and emails. The screen proved responsive to the touch, and can be controlled using a stylus housed in the bottom corner of the device. We found the handwriting recognition proved accurate and easy to use, if a little slower than a regular keypad.

In addition to the touchscreen, navigation can be achieved using a pointing stick that sits below the screen. There are also several large buttons, which help to make it simple to control the X600.

One of the buttons features a Home icon, and pressing it takes you to E-TEN's Quicklaunch interface. Using this, you'll be able to launch various functions by tapping the screen.

The X600 uses Microsoft's Windows Mobile 6 operating system. There are several useful applications included as standard, such as Word, PowerPoint and Excel Mobile, which are ideal for creating documents or transferring files between the Glofiish and your laptop.

Those wanting to download large attachments will be disappointed to find there's no 3G, but there is an 802.11b/g Wi-Fi adapter, so you'll be able to take advantage of nearby wireless hotspots. Bluetooth is included for wireless connections to other digital devices.

The X600 features a SiRF Star III GPS receiver, so you'll also be able to use it for satellite navigation. This is the same chip as you'll find in most high-end dedicated satellite navigation devices, and offers the most accurate tracking. There's no mapping software included as standard, but it's easy to add at a later date.

Build quality is excellent, with matt-black plastics that are both tactile and hardwearing. The screen is surrounded by brushed aluminium, and purple coloured accents help this device to stand out in an often conservative market.

It's amazing how many features have been crammed into the X600, and if you're after a touchscreen device this is definitely worth a look. However, those wanting to create documents may want to try it first, as it's slightly hampered by the lack of a hardware keypad.