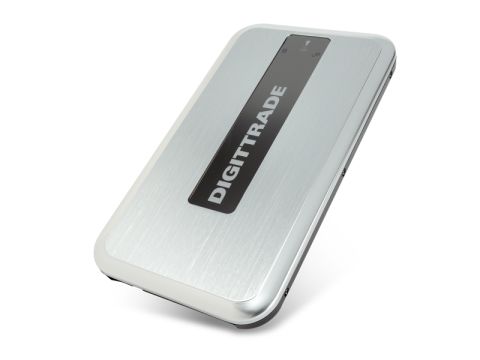 Obtuse and a little rickety, this drive is fit for purpose, but only just

When your first experience with a secure hard drive involves its flimsy metal fascia peeling off the casing, you know it's a bad sign.

In most cases an object falling apart in your hands before you've even plugged it in is a precursor to disappointment. As wrong as it would be for us to dismiss Digittrade's ingenious hard drive in the first paragraph, we're going to.

It's not all it's cracked up to be. But let's hand it a plus. The box marked 'secure' has not so much been ticked as completely filled in and surrounded with exclamation marks. This can come across as anti-access, like you're in a fight every time you want to get to your own files.

When locked, the contents of the drive are encrypted, meaning that drive is inaccessible whether it's in or out of the enclosure, and the USB interface transmits no volume information to your Mac. Secure indeed!

To unlock it, you're meant to wave one of the two included RFID keyrings over the drive. But it's not even that simple; it requires some kind of voodoo trick we haven't quite worked out.

We had to plug and unplug the drive around 10 times before it would unlock even once – highly secure, then, but not exactly practical.

The encryption means USB transfers are even slower to this drive than most others, and it comes formatted with NTFS, so you'll need to repartition when you first fire it up, unless your a Windows user, of course.

Between this, the astonishing price, its temperamental interface and the disappointing build quality, we're just not very impressed. Lovely concept, poor execution.