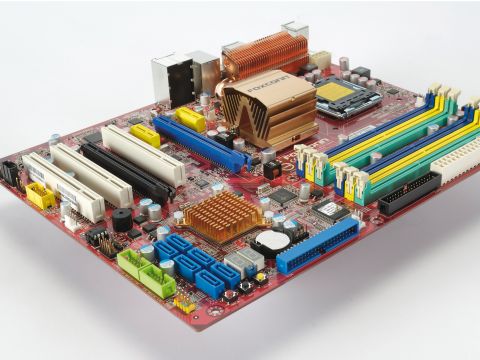 If the P35AP-S was a football club, it would be Liverpool FC

We're not usually convinced by boards which support two memory types, like this Foxconn effort.

But coming in at the top of our benchmarks is quite an achievement - proving that that the P35 remains competitive against its bigger brother.

Better sound for your pounds

There are some neat tricks here too - like the 'Dual Audio' chip, which allows you to divide up sound sources between outputs.

So you can make a VoIP call on headphones while playing a game on speakers, for example.

It's a very stable board under overclock, too, thanks to solid capacitors and power regulators. Foxconn's 'Gladiator' BIOS may simply be a re-skin of the standard P35 options, but it will go beyond 450MHz FSB with ease.

Best of all, though, is the fact the board is coloured red. Motherboards used to be colourful - at least this one is.