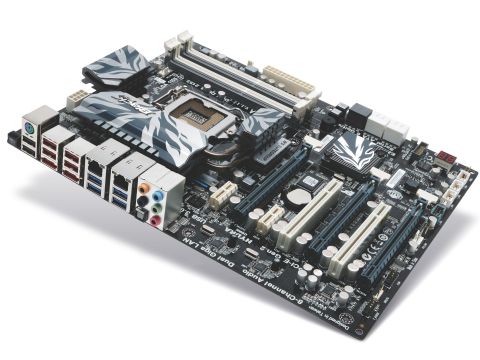 The ECS P67H2-A Black Extreme has a striking look

Everybody's doing it and so is ECS, releasing its top-end Sandy Bridge motherboard, the P67H2-A Black Extreme.

ECS may not be as well known as some of its rivals, but it does seem to come out with some interesting boards, especially its Black Extreme series for the enthusiasts.

And the latest addition to this line is no exception.

That is to say you can use Nvidia and AMD cards together in the same board. While the jury may be out on the performance benefits of the technology itself, it's an interesting route for ECS to take.

There's also not one but two USB 3.0 controllers on the board, meaning you get four ports on the rear panel as well as an aluminium two port USB 3.0 front expansion adaptor. That adapter is bundled with the board and sits in any spare 3.5-inch panel at the front of any PC case.