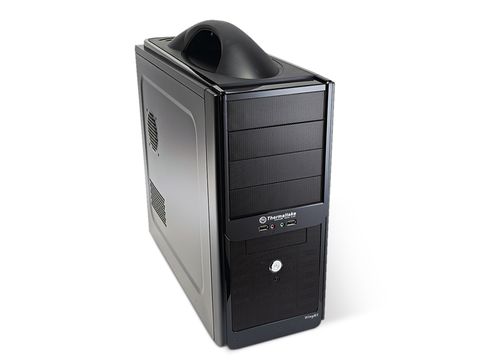 The latest budget chassis from Thermaltake, the Wing RS 301, is a bit of a mixed bag of good features and ugly design. You see, it's not a particularly good case.

Thanks to its main selling point, the top-mounted handle, it's one ugly looking chassis. Okay, without it, it would look a little plain and dull, but with it, it looks like it has a tumour sprouting from its lid.

In its defence it does have tool-less drive mountings and a raised platform for your motherboard, allowing for air circulation around your components, but otherwise it's a painfully sparse affair.

The build-quality isn't what we've come to expect from Thermaltake. There's a definite rattle to the rear-mounted 120mm fan and the chassis doesn't feel that stable on its four rubber feet.

The handle denotes portability, but if you're lugging around your rig regularly then you're going to want your case to offer some sort of protection, and this flimsy-feeling chassis isn't going to give you that necessary security.

And at £45 it's not exactly budget. If you want a budget case you really don't need to spend this sort of cash (as shown in our rig-building feature), but if you have got a little extra to spare on some PC armour then something with the build-quality and feature-set of the Coolermaster CM-Storm Scout would be a much wiser purchase and is only £15 more expensive.