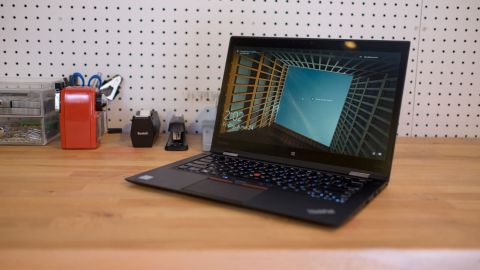 Lenovo has produced a 2-in-1 device which is a great all-rounder with many strong points, and the only real downsides are the price and battery life.

It managed not only to keep the successful line going but more importantly infused some interesting features while sticking to the ThinkPad ethos, which was critical in terms of retaining existing customers.

Which brings us nicely to the ThinkPad X1 Yoga Ultrabook (not to be confused with the ThinkPad X1 Carbon or the ThinkPad X1 Tablet), a fusion of the classic ThinkPad DNA with Lenovo's very own Yoga, a range that's only four-years-old but has been one of the most popular in the industry, and almost singlehandedly rekindled the 2-in-1 category.

Hailed by Lenovo as the world's lightest 14-inch 2-in-1 business laptop, it comes at a price point that puts it squarely in a league of premium, high-end devices.

The rest of the traditional business/enterprise laptop vendors have a 2-in-1 laptop with a bigger-than-13-inch display. Dell's Latitude 12 7000 series is a 12-incher only while rugged models from Panasonic and the likes are altogether different beasts.

Lenovo engineers opted for a dual-hinge design with an anthracite matte finish all round. The hinges allow the screen to be rotated all the way, converting the X1 Yoga into a tablet within seconds. In that mode, the keys retract automatically and can't be pressed.

At 1.27kg, it is lighter than your average Ultrabook and while its footprint is slightly bigger than an A4 sheet, the thickness (17mm) is more than reasonable for a convertible laptop with a 14-inch diagonal. The bottom line is that there are thinner and lighter laptops around but most, if not all, don't offer the full array of features that comes with the X1 Yoga.

That includes – on top of the tablet functionality – far more connectors than seen on thinner rivals (the OneLink docking station connector, a Mini DisplayPort, three USB 3.0 ports and a full-size HDMI port). Located behind a flap are a microSD card slot and a SIM card reader if you plumped for the mobile broadband option. No USB Type-C connectors are present, however, which will come as a disappointment for many.

There's also a stylus located next to the power button; it's short, a tad slippery and thin, which makes long note-taking sessions uncomfortable. Fortunately, Lenovo gives you the option of a full-size pen.

The display is a beautiful IPS affair with a semi-reflective finish (which proved to be a fingerprint magnet) and a native resolution of 2560 x 1440 (QHD).

The top edge of the screen is slightly tapered which makes it easier to open the laptop with one hand. As expected, because of the touchscreen functionality, the screen has a massive bezel, varying between 11mm and 32mm.

The model we tested wasn't the one equipped with an OLED display but according to our previous hands-on of the X1 Yoga: "OLEDs typically provide better contrast ratios, viewing angles and black levels. Unfortunately, OLEDs also come with a few flaws, including the potential for burn-in and shorter lifecycles than LCD displays.

"We can't immediately tell if the X1 Yoga will have these issues, but it was obvious to me and to my colleagues that the OLED monitor featured more vibrant colours, more complex blacks and much less glare than its LCD brother."

As for the keyboard, it doesn't disappoint, offering the best features of ThinkPads and making full use of the much larger usable area. That translates into larger keys, with the Escape key, for example, being around three times bigger than the one on the Dell XPS 13.

ThinkPad keyboards are also known for their typing experience and this one is no exception. It offers a decent, comfortable key travel combined with a slightly curved shape that instinctively guides the fingers to the middle of the key.

The touchpad disappoints for two reasons (although we are nit-picking really). It is smaller than expected (even smaller than the one on the nimbler Dell XPS 13) and it doesn't have physical left/right buttons. For that though, you can always use the TrackPoint eraser head pointer, which is also available on the X1 Yoga.

Using the stylus – a Wacom AES pen – was pleasant for most part. We noticed no lag, no artefacts and didn't encounter any issues with drawing doodles or handwriting. The screen has a built-in digitizer which supports 2,048 levels of pressure sensitivity.