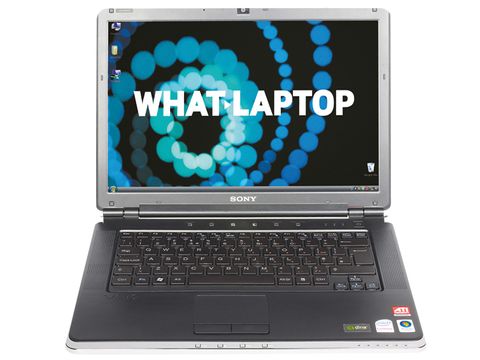 It uses a 14.1-inch display, but at 2.5kg, it's still a reasonable option for everyday travel

A colourful and comfortable laptop, but it's distinctly average in terms of power

As such, it's available in a range of brightly coloured hues, and comes with Windows Vista Home Premium software pre-installed as standard.

It uses a 14.1-inch display, but at 2.5kg, it's still a reasonable option for everyday travel. We found the screen ideal for watching movies on, where the extra inches really became apparent.

You'll find media buttons on the front of the chassis, making it easy to control your films at the touch of a button. It's a bright and colourful display, helped by a glossy Super-TFT coating. It's not ideal on the move, however, where we found reflections in bright conditions were more pronounced.

The Sony features a dedicated graphics card, and multimedia performance was impressive. It uses a mid-range ATi adapter, so you still won't be able to run some of the latest games, but applications and older games ran with ease.

The wide chassis offers plenty of space for a good-sized keyboard, which is flanked by speakers. The keyboard is identical in design to the one found on Sony's TZ-series laptops, with all keys protruding individually through the main chassis casing.

Although it works well on smaller machines, it looks a little compromised on a laptop of this size. There's plenty of space between the keys, however, and it was also responsive to use.

Build quality is good, although it's not the best around. While it's a strong chassis, the plastics are easily marked, and we'd advise using a protective case if you're going to regularly use it on the move.

Processing power is provided by Intel's Core 2 Duo T7100 chip, which is one of the slower processors around. Everyday performance was less impressive as a result. You'll still be able to carry out multi-tasking, but we did see the system slow down occasionally, even with 2048MB of memory on hand.

A DVD rewriter is included for backing up files and a Sony memory card reader is in place. Sony has also included an SD card reader, so you'll be able to transfer photos and other files easily from your digital camera, PDA or smartphone.

Although the Sony doesn't offer anything outstanding, it's an impressive all-rounder. The dedicated graphics card means you'll be able to get the most out of multimedia applications, and it's also a comfortable machine to use.