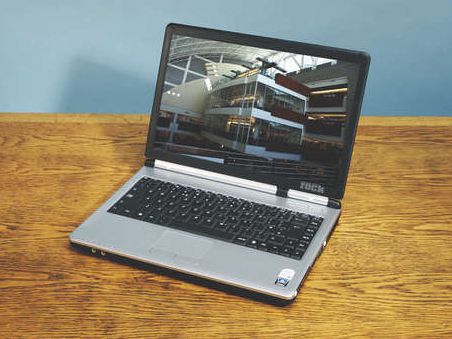 The Pegasus 330 makes a good impression as soon as you take it out of the box, with its rounded corners and simple black design. It's just the right size as far as we're concerned: small and light (a portable 2.1kg), yet large enough to provide a great 13.3-inch screen with a 1,280 x 768 resolution.

The specification doesn't quite match up to its style, though, which is a pity when you consider that this is quite an expensive system at £880. The Core Duo T2300 CPU, 512MB of RAM and 80GB hard drive are just what you'd expect from a laptop at this price point.

In practice this isn't necessarily the case, though. The 330 topped our MobileMark 2005 charts with a score of 223. This result is a little misleading, because the system overclocks the CPU by five per cent when plugged into the mains, but even without this it's a good performer. The laptop has other advantages, too.

The Pegasus 330 fits the 'student notebook' brief. There's excellent networking support, for instance (802.11a/b/g Wi-Fi, Gigabit LAN), software, including Works 8, Bullguard Antivirus, a one-month trial of Napster and a two-month trial of Office 2003. The USB digital TV tuner is a nice extra and the whole thing is wrapped up with a three-year collect and return warranty.

The system also comes with InterVideo InstantOn, which is supposed to turn your notebook into a pure entertainment system. Press the InstantOn button and you can watch DVDs or videos, play music and more (so the publicity goes) without waiting for Windows to boot. This works well enough (it's like a simplified Windows Media Center), but isn't quite as 'instant' as the name suggests.

Not everything here works, then, but the Pegasus 330 still remains a stylish, practical and effective notebook, which has to be on your shortlist. Mike Williams