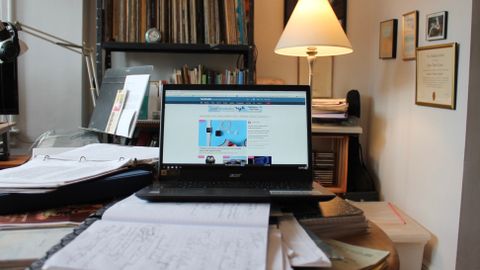 The hardware specs of the rival Dell Chromebook 13 are not even close to the 14 for Work's. Dell provides half as much RAM and storage, a smaller screen, a significantly slower Celeron processor and no USB-C port. Granted, it is $135 cheaper and Dell offers Core i5-powered models, but the value to power ratio is in the 14 for Work's favor.

The Chromebook Pixel's kit, on the other hand, is very similar to that of the 14 for Work. Both have Core i5 processors (though the Pixel's is a 5th gen Haswell chip), as well as 8GB of RAM and 32GB of storage.

The Pixel, however, has an additional USB-C port as well as an incredibly crisp 2,560 x 1,700 touchscreen display. Those extra features are the reason for its $999 price tag, which is overpriced for this class of laptop no matter the specs. In a head-to-head matchup, the Acer's enterprise Chromebook once again comes out on top with a superior value to power ratio.

Here is the Acer Chromebook 14 for Work's configuration sent to techradar for review:

The Acer Chromebook 14 for Work has an excellent selection of ports: two USB 3.0's, an HDMI port, an SD Card Reader and, of course, the USB-C. Only the Pixel and the forthcoming HP Chromebook 13 have two USB-C's to rival the Acer's port options.

A minor nitpick: the 14 for Work's power cord plugs into the USB-C port. There is no separate, dedicated power jack. Want to use the USB-C port? You'll have to unplug the laptop first.

Here's how the Acer Chromebook 14 for Work performed in our suite of Chromebook benchmark tests:

As our benchmarks show, the 14 for Work's hardware delivers. Websites and apps load very quickly, even when multiple tabs are open and background media is playing. Frankly, Acer's Chromebook is one of the zippiest laptops I've used.

The 14 for Work's benchmark results blow away the Dell Chromebook 13. Acer's Chromebook scores 100% better than its Dell rival on both the Octane and Kraken tests – and that alone is worth the $135 premium.

Against the Pixel, it's no surprise the 14 for Work holds its own on our anecdotal web and app usage tests – the two have nearly identical hardware profiles. Both are brisk web surfers, and only the $1,300 "Ludicrous Speed" Pixel – which features a Core i7 processor and double the RAM – surfs faster.