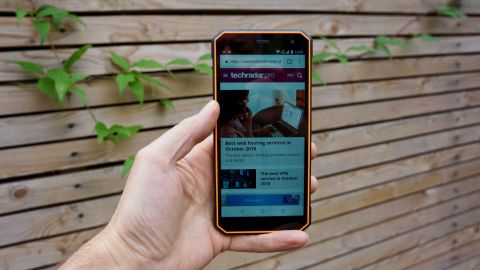 It is always liberating to use a phone that you don’t mind throwing around and the Nomu S50 Pro feels like it can take the knocks without picking up scratches. The screen and rear camera still looks too vulnerable to drop from any real height, but it is rugged enough for general outdoor clumsiness and it is certainly waterproof.

Here’s how the Nomu S50 Pro performed in our suite of benchmark tests:

The fingerprint reader works reliably and Android Oreo fires up quite quickly. The Nomu skin doesn’t look great, so you might want to personalise the home and lock screens yourself. The 5Ah battery lasts for a full day and half of busy use charges quickly through the USB-C port, but it’s frustrating that wireless charging is not an option.

The function button on the side of the phone gives you a really useful shortcut to the camera app. One press takes you to the rear camera and a long press switches it to the front camera. It would have been great if a double press released the shutter and actually took a photo, but unfortunately you have to use the touchscreen for that, which is annoying if you are wearing gloves, or wer hoping to take a shot with one hand.

The biggest issue we had with the Nomu S50 Pro was its call quality. Every call we made sounded tinny and compressed through the internal speaker and also sounded terrible at the other end, which suggests the microphone is also weak. You can make yourself understood, but voices just don’t sound as clear as every other handset seems to manage.

The good news is, if you are looking for a budget rugged handset with a big battery, big screen and dual SIM slots you have plenty of choice. The bad news is that you will have to look further than the Nomu S50 Pro for the best example. It is perfectly fine as a robust phone that runs Android Oreo without a hitch and it ticks most of the boxes in our list of essential outdoor features.

The function button that takes you to the camera app is useful and the battery lasts very well, but call quality is not great and that, after all, is the most important function of a phone. It is also slightly more expensive than the rest of its similarly specified rivals and we can’t see any reason to justify it. In short, it is an adequate outdoor handset that does the job, but not quite as well as the competition.