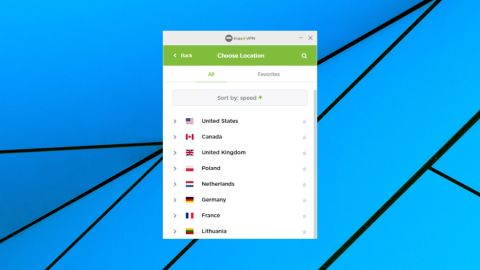 HideIPVPN looks great on the surface, but encryption and technical issues under the hood leave us unsure about its abilities. We would still use it as a website unblocker, but probably not for anything serious.

HideIPVPN is a combination Smart DNS and VPN service which claims to offer 'blazing fast speed' and the 'highest level security' for a fair price.

The VPN gives you access to a modest 29 locations across 11 countries (North America, Europe, Australia, Singapore), has clients for desktop and mobiles, and supports a wide range of protocols, including OpenVPN, L2TP, PPTP, IKEv2, SSTP and SoftEther.

A 24-hour trial enables checking out the VPN before you buy, and there's a full 7-day trial for the Smart DNS service.

As we write, for instance, this is how the support site answers the question: What information do you store?

"We do store your name and your billing details. We do NOT keep any server logs."

Switching to the official privacy policy doesn't help very much. HideIPVPN says it may collect personal information, for instance, but doesn't say exactly what. Well, thanks.

We did find a line saying HideIPVPN collected 'information required to log into our VPN and Smart DNS services through our software or manual created connections', but that's extremely vague. It could mean the system records your username, but deletes it at the end of the session. Or it could mean there's a complete log of every session, with start and end times, incoming and outgoing IP addresses, bandwidth use and more. There's no way to tell.

VPNs have got away with this lack of detail for years, but that may be coming to an end. With top providers like TunnelBear, NordVPN and VyprVPN putting their systems through public audits to verify what they're doing, services which can only offer vague promises on their websites might struggle to compete.

HideIPVPN's free trial doesn't ask for credit card details or any other payment information. Just give the company your name and email address and login details arrive within seconds.

Download links point you to the Windows, iOS, Android or Mac clients, or you can explore various tutorials to help set up the service manually.

The Windows client installed without any hassles. Its interface is clear and straightforward, the server list enables selecting locations within each country, and a simple Favorites system allows you to group commonly used servers together.

There's a kill switch, but it's application-based, meaning you must set up apps to be closed when the connection drops. That's more awkward to set up than the usual system-wide kill switch, and increases the risk of some IP leakage before the specified apps shut down.

The client was easy to use and generally worked well, but with a few quirks. It can automatically choose a location, for instance, but this could be further away than you think. We were testing from the UK, but although HideIPVPN has seven UK locations, the client allocated us a server in Luxembourg.

Whether you use a kill switch or not, it's important a VPN app can handle the unexpected loss of your connection. HideIPVPN's client did better than some, noticing when we forcibly closed PPTP and OpenVPN connections and automatically reconnecting. But it didn't raise any alerts to warn the user they were now unprotected, leaving at least a brief window when their real IP could be exposed.

HideIPVPN supports OpenVPN connections, but our checks revealed some issues. The OpenVPN executable (the file managing the process) was an ancient version 2.3.9, released December 2015. And although the website says HideIPVPN uses AES 256-bit encryption, the OpenVPN configuration on our system was set to use AES-128 with outdated SHA-1 authentication.

There was better news with our privacy checks, as we couldn't spot any DNS or WebRTC leaks, no matter how many test sites we tried.

Our performance tests were a little more mixed. UK speeds were 45-50Mbps, 30% below the best of the rest, but US performance was better at 50-60Mbps, and Australia was average but usable at a typical 20Mbps.

HideIPVPN is a likeable service, great at website unblocking and fairly priced. The vague privacy policy and ancient OpenVPN setup leave us wondering what's happening underneath, though. Try it to unblock Netflix and others, but be careful if you're doing anything privacy-critical.