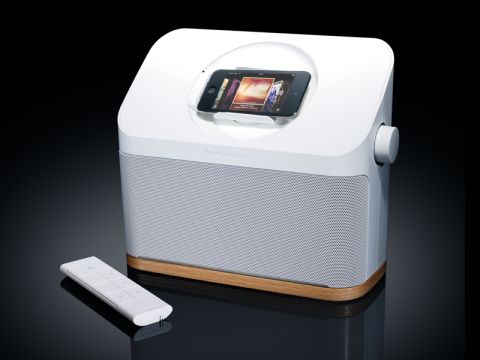 Available in black or white, Conran Audio's iOS speaker dock has an unusual but attractive style

The Conran Audio iPod Dock is a stylish speaker set and is very versatile.

As well as a 30-pin dock that holds your iPhone or iPod in portrait or landscape orientation, there's a 3.5mm AUX-in and stereo RCA ports for other audio devices. A USB socket connects to your Mac to sync a docked iOS device, though a USB connection won't act as an audio-in.

Its Bluetooth feature is especially noteworthy, supporting the latest aptX codec for CD-quality streaming from compatible equipment, including Macs running OS X 10.6.5 or later, but not iOS devices.

In our tests, the dock performed admirably through Bluetooth, effortlessly pairing and suffering no distortion or signal break-up.

The Conran's style is minimalist in the extreme. There are no on-board controls other than a multifunction volume knob you also press to cycle through input sources. All other controls are slaved to the remote, which is neatly housed in a niche on the side of the unit when not in use.

Six pre-defined equaliser settings let you tailor the output to suit your music's genre. Unfortunately, the controls aren't very instinctive, with the track skip buttons atop rather than next to each other and the current equaliser setting indicated by unlabelled LEDs on the unit's front.

Audio is lively and detailed, with each instrument impressively clear. Treble and mid-range tones are reproduced effortlessly, giving your sounds a vitality that's sometimes absent in mid-priced systems.

Unfortunately the bass is a little flabby, and not very meaty at all. Its sound stage is a bit small too, with poorly realised stereo effects doing little to shape the audio.

To an extent this is unsurprising in a system of this size, but companies such as Altec Lansing have proved it's far from impossible to make stereo speakers sound much further apart.

This dock's not up there with true giants of iOS docks such as Arcam rCube or Bang & Olufsen BeoSound 8, but it's substantially cheaper and good value for money overall.