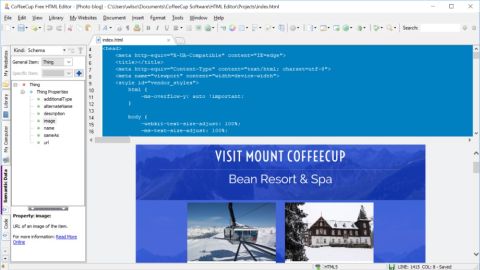 For anyone starting out in website creation, this is likely to be too intimidating. But if you have a little HTML knowledge and want a powerful tool to put in to use, this does the job.

Over recent years, there's been a surge in the popularity of online website builders. Considering the field we're talking about this seems a little obvious, but it took a while for internet-based site creation tools to really take hold.

But while the likes of WordPress, Drupal and Joomla are incredibly popular, there is still room for more traditional HTML editing software – and this is where the likes of CoffeeCup Free HTML Editor comes into its own.

As you might guess – but not necessarily expect – from the name, CoffeeCup's software is an HTML editor in the purest sense of the word. There's no visual editor, no dragging and dropping of elements, and none of the other such luxuries you might find in other tools.

Does this make it a bad program? Absolutely not. You won't be left adrift in a basic Notepad-style sea of code – CoffeeCup Free HTML Editor lets you preview what you're coding, there's FTP support for uploading files, and there's a smattering of wizard-driven tools to speed up the creation of certain elements. Crucially for users on a budget, it's also free.

CoffeeCup Free HTML Editor does feel a little dated – and the same can be said of the bundled templates and themes – but there's support for HTML 5 and CSS3 so you can create modern websites providing you're willing to put in the manual time and effort.

While slightly intimidating for absolute beginners, CoffeeCup Free HTML Editor offers to help you get started by giving you the choice of creating a single web page, or designing an entire site as a project. Opting for the latter makes it easy to keep all related files together, and quickly upload changes using the integrated FTP client.

There are some minor annoyances, such as the fact that the free version of the program doesn't include a spell checker, and that features like the time-saving tag library are only demos. The interface isn't the prettiest thing in the world either, and offers little scope for customization. This could be what turns some people away from what is otherwise a competent design tool.