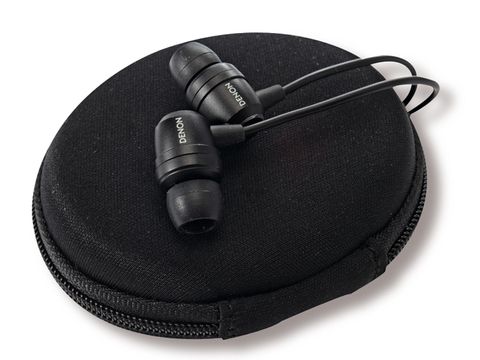 If you like a clean, natural sound, these are ’phones for you

Half the price of the AH-C700s, these AH-C551s sound way better than half as good

Colour printers fall into two categories (and, yes, this is the correct text in this review slot) – those that try to represent the colours in images as accurately as possible, and those that give a little punch of saturation and contrast to make them look sexier. Neither is ‘better’ – it depends on what you want.

It’s a similar story with audio. Sound produced by Bose devices, for instance, tends to be big, meaty and slightly overblown. In contrast, the sound from these Denon earphones is admirably neutral, with no obvious sign of bias towards any part of the audio range. And though they’re not quite as capable as their big brothers, the AH-C700s, at reproducing the very bottom end of the frequency spectrum – bottoming out at 15Hz rather than the AH-C700s’ 12Hz – the bass is still glorious.

If you’re used to cheaper earphones, the sound here might seem a little thin, but it’s truer to the recording; when heavy bass does cut in, you physically feel it. Detail is phenomenal at the high end, too: you’ll hear nuances in strings you didn’t know were there before, though as always with more expensive audio components, the AH-C551s are ruthless with low-bitrate tracks.

Like the £130+ AH-C700s, three different sized fitting cups are supplied, and with these too we had to spend some time getting a decent fit; unlike their more expensive siblings, here you do get a carry case. There’s less isolation from ambient noise here than with Shure’s models, but you still feel cocooned away from traffic and office prattle.

The cable is split into the main section (53cm long) and an extension of almost 90cm, and while the interconnect can add a little weight that occasionally threatens to tug the ’phones from your ears, it’s good to have the option.

Ultimately, these are a better buy than the AH-C700s: they sound phenomenal and are kinder to your wallet, too.