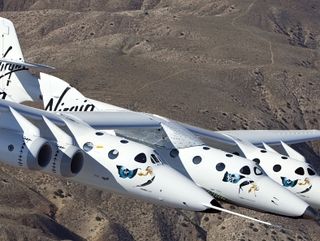 The space cruiser spent just under three hours attached to the WhiteKnightTwo carrier aircraft flying around the Mojave Air and Spaceport in California. The VSS Enterprise has been developed by Ansari X prize-winners, Scaled Composites.

"This is a momentous day for the Scaled and Virgin Teams", said Scaled founder Burt Rutan. "The captive carry flight signifies the start of what we believe will be extremely exciting and successful spaceship flight test program."

The captive carry test flight reached an altitude of 45,000 ft (13716 metres) which was just under the 50,000 ft release height planned for actual space flight, in which the VSS Enterprize will hit Mach 4 once released and cross the Kármán line to reach its maximum height of 361,000 ft (110 km) before it heads back down to earth.