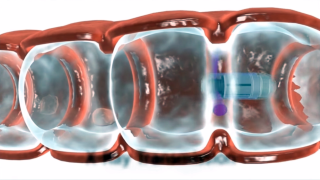 Getting screened for colon cancer is generally an unpleasant, expensive experience. But a wireless sensor-in-a-pill developed by medical engineers could offer an inexpensive alternative.

The 'Check Cap' uses similar LIDAR technology to that found in Google's self-driving cars. As it passes through your colon, it emits a signal that detects how far it is from the colon wall. By doing this in every direction as it travels, it can map the inside of your colon.

That data is then sent to a wireless patch attached to your lower back which saves it until your next visit to the doctor - who can then reassemble a full 3D rendering of your internals. From there, they can check the 3D model for irregularities like a CT scan.

The Check Cap is the creation of Yoav Kimchy, who's been working on it for more than a decade - after his grandmother died of colon cancer at the age of 48. As well as comfort, it's much cheaper than a traditional colonoscopy.

The radiation emitted is low, too - about equivalent to two airport body scans or one chest X-ray. It's currently undergoing clinical trials in Europe, and if things go smoothly, then it should be on the market in 2016.