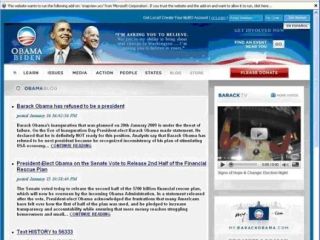 Barack Obama gets a high-tech inauguration

Whether you were watching the inauguration live in the sunshine of DC, or via a video stream with the BBC's bizarre commentary ("very unusually it has turned noon here in Washington"), you were probably posting about it on Facebook.

There were over 600,000 status updates posted through the CNN.com Live Facebook feed, with Obama's page accumulating 4 million fans and over 500,000 wall posts.

President Obama's speech emphasized the important of solar and wind power, praised technology for its ability to lessen the cost of healthcare (er, has he had a CAT scan recently?) and promised to improve the nation's digital infrastructure.

Microsoft will be assembling a number of Photosynths - interactive 3D renderings - of the occasion at its Photosynth website http://photosynth.net/inauguration.aspx, and now all the fuss is over you can attend a celebratory Inauguration Ball in Second Life www.nninsl.org/2009/celebrate-the-obama-inauguration. Don't forget your Yes We Can badge now....